Manchester United striker Marcus Rashford, 21, is set to be priced out of a move to Barcelona because they feel it would be too expensive to lure him away from Old Trafford. (Express)

Tottenham are increasingly confident that midfielder Christian Eriksen, 27, who has been the subject of rumours regarding a move to Real Madrid, will sign a new long-term contract. (Goal.com)

Paris St-Germain are ready to make a shock £65m offer for Crystal Palace forward Wilfried Zaha, 26, who has set his heart on leaving the club this summer. (Express)

Crystal Palace want £80m for Zaha but are reluctant to sell both the Ivory Coast international and right-back Aaron Wan-Bissaka, 21, in the summer. (Mail)

Manchester United goalkeeper David de Gea, 28, is said to be growing increasingly frustrated with the club's refusal to meet his long-standing request for a pay rise. (Times)

Manchester City have targeted to buy Argentine midfielder Thiago Almada, 17 - dubbed the new Lionel Messi and playing in his country's top division for Velez Sarsfield - in a £20m deal. (Sun)

Ajax midfielder Hakim Ziyech, 26, is available for just £25m, which has alerted the attention of City, Manchester United, Arsenal and Liverpool. (Mirror)

'Gripping and nervy in a different way'

Phil McNulty on the latest meeting between Man City and Spurs

Real Madrid's Gareth Bale could opt for a lucrative move to China, the United Arab Emirates and MLS, as well as a top European side - but unless his current deal, understood to be worth over £500,000 a week, is matched, the 29-year-old Welshman could see out a contract that runs until 2022. (Mirror)

Napoli fear being priced out of a move for Kieran Trippier, with the Italians expecting Tottenham to value the England right-back at £40m. (Sun)

Chelsea have rejected a £10m bid from Brighton for England Under-20 defender Reece James, 19, who has also been linked with Crystal Palace. (Sun)

Manchester City are set to hand John Stones a new contract in a bid to show the 24-year-old England defender that he is still part of their future under Pep Guardiola. (Mirror)

Manchester United assistant Mike Phelan has not agreed a contract extension and is believed to favour a sporting director role. (Mirror)

Sunderland owner Stewart Donald has turned down a shock £70m bid from a mystery Malaysian. (Sun)

Paris St-Germain could have Brazil forward Neymar, 27, back from injury ahead of schedule against Monaco on Sunday night. The forward has been out since January with a foot injury. (L'Equipe - in French)

Real Madrid coach Zinedine Zidane, linked with a move for Paris St-Germain striker Kylian Mbappe, 20, has admitted he will make changes to the club's style of play next season but refused to discuss transfer targets. (London Evening Standard)

Manager Rafael Benitez, under contract until 30 June, has revealed he is now prepared to wait until the 11th hour before making a decision on his Newcastle future. (Newcastle Chronicle)

Former Arsenal midfielder Edu, 40, is set to return to the club as technical director, with 17-year-old Brazilian Gabriel Martinelli lined up to be their first summer signing. (Mail)

Wolves have been 'offered' AC Milan striker Andre Silva after Sevilla declined to take up their option to sign the 23-year-old Portuguese for around £35m. (Calciomercato, via Birmingham Mail)

Brighton captain Bruno, 38, insists he has no hard feelings about a lack of game time at the Amex, despite only one Premier League start at home since November. (Argus)

Norwich City's squad will share a huge £10m promotion bonus if they secure their return to the Premier League. (Telegraph)

Ex-Brentford and Rangers manager Mark Warburton has been interviewed for a second time by QPR as they look to appoint Steve McClaren's successor. (Mail) 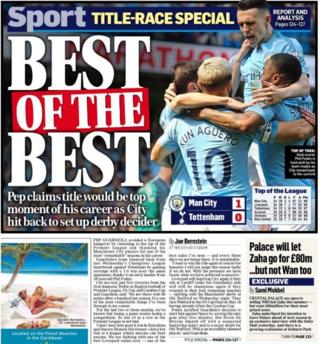