Real Madrid will look to sell Wales international forward Gareth Bale this summer - or loan out the 29-year-old if no suitable buyer can be found. (Marca)

Bale could join Manchester United in a loan deal for as little as £5m. (Marca, via Mirror)

Manchester City are ready to break their transfer record of £60m to sign 22-year-old Spain international Rodri from Atletico Madrid as the long-term midfield replacement for Brazilian Fernandinho, 33. (Telegraph)

Will 96 points be enough for City?

The latest developments in the race for the Premier League title

Tottenham are prepared to sell England international full-back Kieran Trippier this summer, with Manchester United and Napoli interested in the 28-year-old. (Sun)

Unai Emery will sanction an Arsenal clearout this summer - with Germany international defender Shkodran Mustafi, 27, among the players for sale. (Mail)

Barcelona are expected to offer Chile international midfielder Arturo Vidal, 31, a one-year contract extension on his present deal, which runs until 2021. (Sport)

Manchester United have made a 60m euro (£51.9m) enquiry to Bayern Munich over a potential summer deal for defender Niklas Sule, 23. (Sport 1, via Teamtalk)

Ex-Manchester City midfielder Yaya Toure, 35, is open to a move to a Major League Soccer side in the United States or joining an Asian team. (Goal)

Manchester United expect to make a profit of £50m from their Champions League campaign, despite a quarter-final exit against Barcelona. (Sun)

Former Manchester United boss David Moyes does not believe the club will finish in the top four this season. (Sun)

Manager Nigel Adkins says he will sit down with vice chairman Ehab Allam on Thursday as he attempts to gain a clear understanding of Hull City's plans for next season. (Hull Daily Mail)

Liverpool defender Virgil van Dijk, 27, has told Manchester United they need to "do themselves a favour" in the derby match at Old Trafford. (Express)

Watford goalkeeper Ben Foster says former Hornets chairman Elton John should cancel his gig in Copenhagen to be at the FA Cup final on 18 May. (Sun) 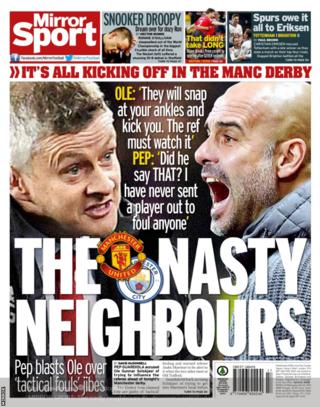 In the Mirror, "The Nasty Neighbours"