It is a race so long that runners need a haircut during it. They can get through 20 pairs of shoes. They run more than two marathons a day. For almost two months. On five hours of sleep a night.

The distance is so staggeringly preposterous that some of those who take part don't think they are capable of it - even after they have completed it.

It is roughly the equivalent of running from Land's End to John O'Groats and back twice. If you ran from the west coast of America to the east, you would still need to do 11 marathons to top up the distance.

At least the scenery on those routes might take your mind off things. The precious few who compete in this race - only those with proven ultra-running CVs are allowed, for their own safety - do so around the same single block in New York.

They head out on the sidewalk down 84th Avenue, past a playground, along the busy Grand Central Parkway, around Thomas Edison High School, down 168 Street and back on to 84th. And they will do this 5,649 times. Why?

The clue is in the name. Founded by the late Indian spiritual leader Sri Chinmoy in 1997, the Self-Transcendence challenges runners to "transcend their own previous capacity", "gain spiritual insights" and "overcome the entire world's pre-conceived notions of possibility".

Those tough enough to have finished it will tell you the race ticks all those boxes - and more.

First, the rules. Runners have 52 days in which to complete the distance. They can run - or walk, or hobble - as much as they want between 6am and midnight.

During the six hours when the course is closed, they need to eat, wash and tend to their battered feet. The longer they take, the less sleep they have.

To save you the maths, 3,100 miles in 52 days equates to 59.6 miles a day. When Ashprihanal Aalto, an unassuming Finnish postman, set a new record of 40 days nine hours six minutes in 2015, he averaged almost 77 miles a day.

It has been described as the "Everest of ultra-running". That does not come close to doing it justice. More than 4,000 have reached the summit of Everest since 1953. Only 43 people have ever completed the Self-Transcendence in 22 years.

"It was the most overwhelming moment of my running life," says Scotland's William Sichel, an ultra-running legend and holder of 693 world, British and Scottish records who completed the race in 2014.

American Yolanda Holder, who has finished 540 marathons and ultra-marathons, became the first person to walk the Self-Transcendence in 2017.

"It just tore me apart," she says. "I've never cried at any of my races. But when I crossed that finish line, boy, I cried."

Herein lies the thrill, the attraction of putting your body and mind through an experience that most people can barely comprehend, let alone would consider tackling.

Women's record holder Kaneenika Janakova, born in Slovakia but now living near the course, describes it as "sacred ground".

Embracing the physical hardship is key to coping, according to associate race director Sahishnu Szczesiul, an ultra-marathon veteran himself. "If you think it's going to be torture, you probably don't belong there." 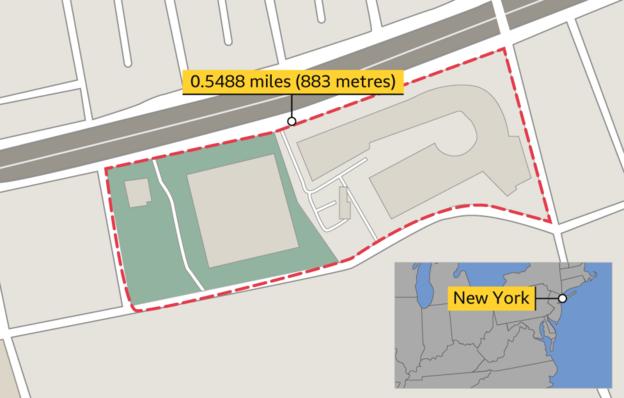 The race is held in Jamaica, Queen's, a vibrant, multi-cultural area now but one which was not always the safest, says Szczesiul. "You were surrounded by all these ghettos - there was lawlessness, drug dealers and homeless people."

American Suprabha Beckjord, who competed in the first edition of the race and ran 13 in a row until 2009, remembers: "In the beginning, nobody would want to leave their car on the street - there would only be a few pieces left in the morning."

Runners must contend with the unpredictable weather of a New York summer. Temperatures have been known to reach 38C, humidity can be stifling and torrential downpours are not uncommon. It is one of the few races where you will see elite athletes competing while carrying an umbrella.

There are no closed roads either. Competitors share the pavement with people going about their everyday lives, so dodging pedestrians and kids on bikes becomes an essential skill.

"I'd never done a race like that. I was absolutely staggered," says Sichel. "Sri Chinmoy definitely had a sense of humour."

Although serious injuries are rare, the toll the race takes on the body can be brutal.

Holder, who holds the record for the most marathons and ultra marathons by a woman in a year - 120 - and completed a marathon on 340 consecutive days in 2015, suffered from blisters so painful in 2018 that she had to go the emergency department at the hospital.

"I named them Misty Blue," she says. "I was crying every day. After I pulled out of the race, I put pictures on social media and people complained because they were so disgusting. A year later, my left foot is still not 100%."

Sichel, who always wears shoes one size too big, is a "fanatic" about looking after his feet but has his own issues. "The chafing can be absolute agony."

The sheer monotony of running around the block thousands of times - the only nod to variety is the fact that the course changes direction each day - takes a mental toll, one that many runners claim is greater than the physical demands.

This is where meditation comes in.

Sri Chimnoy, who moved to the US in the 1960s and became a spiritual teacher in New York, took up long-distance running and then weightlifting.

By using prayer and meditation to increase his "outer strength", he lifted elephants, planes and cars, as well as people - 8,000 of them between 1988 and 2007, including Nelson Mandela and Desmond Tutu.

"It is just your mind torturing you. With meditation, it becomes possible," says Beckjord. Aalto agrees. "You go into a special place," he says.

Holder, one of the few runners who is not a Sri Chinmoy disciple, says she "transcended" 48 days into her first 3,100-miler.

"I saw myself right in front of me," she recalls. "It was very, very scary. The next night, I saw myself again and I said: 'You go, girl.' I really tapped into my inner self and spirituality."

Sichel adds: "I look like a zombie. I'm in my own world. My helper said to me once: 'You've not spoken for three hours.'"

Everyone copes in their own way. "Never think of the whole distance," warns Beckjord, who imagines she is a child, running through the garden. "There's this beautiful big tree. It's on the busiest corner of the course, but it maintains a peaceful place. You get joy from the simple things."

Janakova repeats mantras or thinks about what she will eat next. Holder may chat to her family on the phone or stream parts of the race on social media, where she is known as the 'Walking Diva'. Austrian Surasa Mairer, a three-time finisher and former female record holder, sings, chants or listens to music.

Runners must eat constantly, whether that be the vegetarian meals provided by the race volunteers who convert a double garage into a makeshift kitchen for the duration of the race, or easily digestible snacks provided by their support crew.

Eggs, bread, pancakes, French toast and smoothies are common staples, while Sichel estimates he gets through three litres of ice cream every day. "It just slips down really well, especially vanilla."

Janakova sums up the challenge of running and eating: "You don't want to eat, then you can't wait to eat. You have to eat something on every lap, so there is no rest for your stomach."

Holder discovered she had a craving for McDonald's, and Aalto remembers running along while eating a packet of crisps and a passer-by shouting: 'You've got to be kidding me.' "He thought I was just out for a jog," he says.

Despite the constant grazing, managing to consume 10,000 calories daily is not easy. The already slender Holder lost more than a stone in weight in the 2017 race, after which she says she "couldn't look at myself in the mirror".

Sleeping is another challenge altogether. Holder struggled to sleep at all for the first two weeks but, when she finally mastered the 15-minute power nap, she said it felt like five hours. "Your body adapts - it becomes like a machine."

"I would dream that I was going around and around in circles," says Beckjord.

Sichel, who says part of his success in ultra-marathons is his ability to survive on little sleep, says matter-of-factly: "You just get used to feeling tired."

Experience is crucial in ultra-running, and a quick glance down the list at some of the runners who have completed the race shows that age is definitely no barrier. In fact, it may be an advantage.

Aalto was 44 when he broke the record. Janakova was 48 when she last completed the race. Beckjord was 53 in her final Self-Transcendence. Mairer was a sprightly 56 when she broke Beckjord's female record in 2016 (she is also a former world record holder for the 5km, 10km, half-marathon and marathon while running backwards). Holder is the oldest female finisher, aged 59. And Sichel was 60 when he became the oldest man to finish in 2014.

The chances are you have never heard of any of them, although Aalto says he once met the Finnish president. "She hugged me."

Ultra-running is among the most niche of sports - and running 3,100 miles is at the very end of that spectrum. Media coverage of the Self-Transcendence is limited, to say the least, although a beautifully shot documentary called 3,100: Run and Become is soon to be released in the UK.

To say the Self-Transcendence is low key is an understatement. The leaderboard amounts to numbers hung on a chain mail fence at the start line. Race headquarters is not much more than a collapsible table and a laptop. Runners grab power naps in caravans parked on the road. They might get a T-shirt for finishing, maybe a DVD and a small trophy in a good year.

A small crowd of volunteers cheering finishers over the line is the norm. Aalto being taken around the course on a specially decorated float when he broke the record in 2015 was positively lavish.

This suits the runners just fine.

"The rewards are intrinsic," says Sichel. "I do it for my own progress," agrees Janakova, who is among those who says she can only take a small amount of credit. "I felt it wasn't really me who achieved it. I feel there is a higher force."

Mairer echoes that, saying: "Because I am not so strong and at home I can't run for a long time, it seems that when I'm at the starting line, I'm another person."

Even Beckjord, a woman whose 13 race finishes mean she has almost run around the world twice, says: "If you look at me, you wouldn't suspect I could do something like that. It had very little to do with me - I just showed up with my shoes."