Chelsea are increasingly confident that the club's transfer ban will be lifted and are looking at signing Bournemouth and England striker Callum Wilson, 27, and RB Leipzig's German forward Timo Werner, 23. (Sun)

Monaco cannot recall France defender Djibril Sidibe, 27, from his season-long loan at Everton, following rumours that the French side were considering terminating his spell at Goodison because of interest from AC Milan. (Liverpool Echo)

Arsenal manager Unai Emery refused to discuss why he left Ozil out of his squad for the Europa League group game win against Vitoria Guimaraes on Thursday. (Mirror)

The future of Liverpool's kit deal is set to be confirmed on Friday when a judge decides whether New Balance or Nike have rights to the lucrative contract. (Liverpool Echo)

Crystal Palace have secured a £22.5m boost after they sold an instalment owed on the deal which took England Under-21 defender Aaron Wan-Bissaka, 21, to Manchester United to an Australian bank in order to receive the money now. (Evening Standard)

Manchester City almost lost out on Pep Guardiola becoming their manager because he struggled to find suitable accommodation, a new book has revealed. (Independent)

Former Netherlands midfielder Ronald de Boer, 49, almost joined Manchester United in 2000 but was advised against it by then Dutch coach Louis van Gaal, who went on to manage United in 2014. (FourFourTwo) 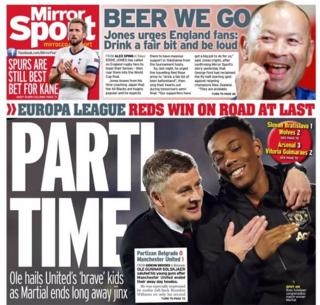 The Mirror focuses on Manchester United's win at Partizan Belgrade