Out-of-favour Arsenal midfielder Mesut Ozil, 31, is open to a move to the MLS, with DC United linked with the former Germany international. (Bleacher Report via MLS official website)

Manchester United have been put off signing Real Madrid's Wales forward Gareth Bale because of the 30-year-old's injury record. (Mirror)

Manchester City will put a £100m price tag on Brazil forward Gabriel Jesus, 22, in an attempt to ward off interest from Bayern Munich. (Sun)

How 'Captain America' announced his arrival in the Premier League

However, Bayern Munich sporting director Hasan Salihamidzic says there is no chance of Germany international Muller leaving the club in January. (Goal.com)

Tottenham and South Korea forward Son Heung-min, 27, is being tracked by Juventus and Napoli. (Express)

Real Madrid are set to end Arsenal hopes of landing Spain midfielder Dani Ceballos, 23, on a permanent deal by bringing him back from his loan for next season. (AS, via Mail)

Barcelona and Manchester United are interested in Inter Milan's Lautaro Martinez, 22, but the Argentina forward has a £96m release clause. (Sun)

Barcelona have held talks with Inter Milan over the sale of Croatia midfielder Ivan Rakitic, 31. (Sport)

Liverpool defender​ Joe Gomez is growing frustrated at his lack of playing time this season and Tottenham and Arsenal are interested in the 22-year-old England defender. (90min)

A delegation of Manchester United officials are set to visit Saudi Arabia as rumours of a takeover by the Gulf state's Crown Prince continue. (Mail)

Napoli are not interested in selling Manchester City target Fabian Ruiz, the 23-year-old Spain midfielder, in the near future. (Gazzetta dello Sport, via Inside Futbol)

Newcastle boss Steve Bruce says he is unsure whether he will be able to strengthen his squad in the transfer window and has not held any discussions about January with the club's board. (Sky Sports)

Inter Milan have put a 20m euro price tag on Brazilian defender Dalbert, 26, who is on a season-long loan at Fiorentina with no option to make the deal permanent. (Calciomercato) 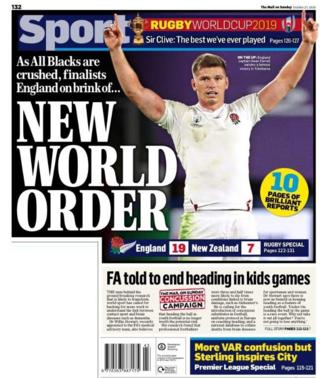