Manchester United are prepared to meet Borussia Dortmund's demands as they attempt to sign England forward Jadon Sancho from the Bundesliga club, who want at least £100m for the 19-year-old. (Mirror)

Who makes it in?

It's Garth's team of the week

Real Madrid hope to take advantage of the deteriorating relationship between Paris St-Germain striker Kylian Mbappe and manager Thomas Tuchel in order to sign the 20-year-old France international. (AS)

Bayern Munich bosses have played down the chances of 30-year-old German forward Thomas Muller, who has been linked with Manchester United, leaving the club in January. (Mirror)

Barcelona's Croatia midfielder Ivan Rakitic, 31, is "open to offers" regarding a January move, with United and Juventus monitoring the player. (Marca)

Southampton want Erik Stoffelshaus, who has worked at Bundesliga side Schalke and Russian club Lokomotiv Moscow, to become their new sporting director, with Manchester United also interested in the 48-year-old German. (Sun)

A photographer plans to send Brescia the bill for his broken camera after Italian former Liverpool and Manchester City forward Mario Balotelli, 29, kicked it in frustration at being substituted. (Sun) 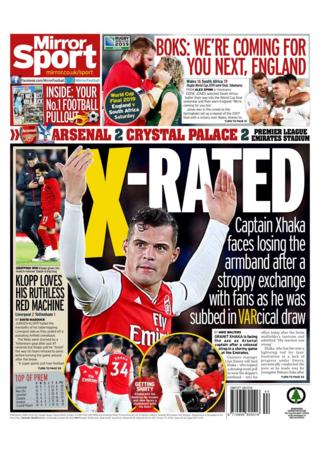 In the Mirror, "Xhaka faces losing the armband"