Watford have called a meeting for Sunday in which manager Quique Sanchez Flores will be sacked for a second time. (The Athletic - subscription required)

Former Tottenham boss Mauricio Pochettino, linked with Manchester United and Arsenal, would have to repay his £12.5m pay-off if he takes another Premier League job this season. (Sunday Express)

Pochettino has been advised not to jump straight back into management at Arsenal by friends who believe he should wait for a better job. (Sunday Telegraph)

Arsenal may wait until the summer to land their top managerial target Brendan Rodgers, but the Leicester boss regards the Gunners post as his dream job. (Star on Sunday)

Jose Mourinho was offered £12m by Real Madrid to not take another managerial job and wait for Zinedine Zidane to be sacked before he joined Tottenham. (Sun on Sunday)

Spain's 31-year-old striker Diego Costa, who joined Atletico Madrid from Chelsea in 2018, will join Flamengo in a £25m deal. (Mundo Deportivo - in Spanish)

Everything you need to know about Euro 2020

Paris St-Germain have yet to offer a new contract to France forward Kylian Mbappe, 20. (Le10Sport - in French)

England goalkeeper Jordan Pickford, 25, insists the Everton players are right behind manager Marco Silva and do not want to see him sacked. (Observer)

Former Manchester United and West Ham striker Javier Hernandez would be open to a move to the MLS. The 31-year-old Mexico international joined Sevilla in September. (LA Times)

Sheffield United will move for former England goalkeeper Ben Foster, 36, if Watford are relegated at the end of the season. (Sun on Sunday)

Inter are preparing to make a move for Atalanta's Swedish midfielder Dejan Kulusevski, who is on loan at Parma this season. The 19-year-old has been linked with Manchester United and Arsenal. (Inside Futbol)

Celtic plan talks with Israel midfielder Nir Bitton to ensure he does not run down his contract. The 28-year-old has been linked with Burnley. (Glasgow Evening Times)

Chelsea's USA midfielder Christian Pulisic, 21, has admitted he "wore a Chelsea jersey around the house all the time" during pre-season while itching to begin the next chapter of his career in west London. (Goal) 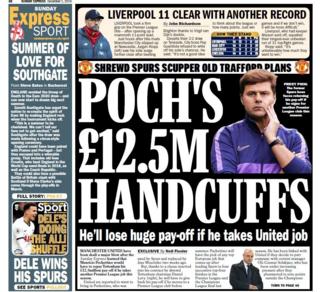 Sensational Fury stops Wilder in seventh round with stunning display

Read more on Serie A games postponed over coronavirus