Wolves are closing in on the signing of Red Bull Salzburg forward Hwang Hee-chan, with a £23m fee having been agreed for the 23-year-old South Korea international. (Hamburger Morgenpost, via Birmingham Mail)

West Ham manager Manuel Pellegrini's position is under threat and ex-Hammers boss David Moyes is a leading contender to replace him. (Telegraph)

Moyes will only consider returning to West Ham if he is offered the manager's job on a permanent basis. (Times - subscription required)

'Liverpool confirm long wait for title is coming to an end'

Everton manager Carlo Ancelotti is weighing up whether to return to former club Napoli to try to sign Italy playmaker Lorenzo Insigne, 28. (Le10 Sport, via Star)

Chelsea's 32-year-old Spanish winger Pedro, who has struggled for first-team football at Stamford Bridge this season, wants to return to former club Barcelona. (L'Esportiu, via Mail)

Manchester United and Paris St-Germain are interested in signing Leicester City right-back Ricardo Pereira but will have to wait until the summer to do any deal for the 26-year-old Portugal international. (Le10 Sport, via Star)

Arsenal have been linked with RB Leipzig central defender Dayot Upamecano and the 21-year-old could be allowed to leave the German club if they can sign fellow Frenchman Tanguy Kouassi, 17, from Paris St-Germain. (Le Parisien, via Mirror)

Hertha Berlin hope they can sign Arsenal midfielder Granit Xhaka, 27, by the end of next week. (Daily Mail)

Burnley and Brighton are considering making a move for Hamilton Academical defender Jamie Hamilton, with the Scottish club wanting £1.5m for the 17-year-old Scotland Under-19 international. (Mail)

Leeds United are trying to convince Arsenal not to recall England Under-21 striker Eddie Nketiah, 20, from his loan spell at Elland Road. (Mirror) 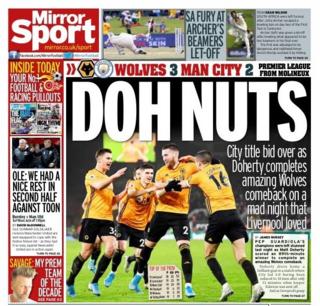