Arsenal boss Mikel Arteta hopes Granit Xhaka, 27, does not leave in January despite the Switzerland midfielder being linked with a move to German side Hertha Berlin. (Football.London)

Manchester United made the biggest contract offer to Erling Braut Haaland but the Norway striker, 19, chose to sign with Borussia Dortmund to continue his development. (Independent)

Chelsea boss Frank Lampard says the club are in talks with right-back Tariq Lamptey, 19, about a new deal, with his current contract expiring at the end of the season. (Goal)

Arsenal must make a significant offer to convince Atletico Madrid to sell France midfielder Thomas Lemar, 24, in January. (AS, via Mirror)

Barcelona will only consider re-signing Brazil forward Neymar, 27, as a replacement for Lionel Messi, 32, when the Argentine striker eventually decides to leave the club. (Sport)

Who is currently the best player in the country?

Find out in Garth Crooks' team of the week

Swansea have approached Liverpool in the hope of signing striker Rhian Brewster, 19, on loan for the rest of the season. (Athletic - subscription required)

Newcastle are working on a contract extension for midfielder Jonjo Shelvey, 27, whose current deal runs until 2021. (Chronicle)

Real Madrid will not allow Colombia attacking midfielder James Rodriguez, 28, to leave in January. (AS)

Stoke and Huddersfield are interested in forward Chris Willock, 21, who is on loan at West Brom from Portuguese side Benfica. (Mail)

Turkey midfielder Arda Turan, 33, hopes to end his career with first club Galatasaray despite currently being on loan at Super Lig rivals Istanbul Basaksehir from Barcelona. (AS) 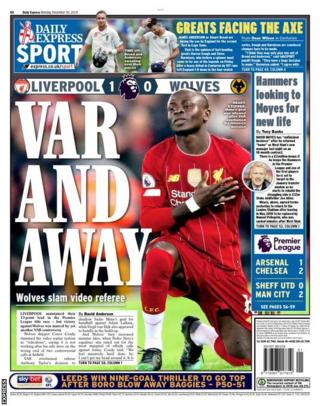 The back page of Monday's Express