The Gunners have turned to Boateng amid concerns they may be priced out of a move for RB Leipzig's French defender Dayot Upamecano, 21. (Evening Standard)

Everton boss Carlo Ancelotti has revealed he was interviewed for the Liverpool job in the aftermath of Brendan Rodgers' sacking in October 2015, losing out to Jurgen Klopp. (Telegraph)

Tottenham's Denmark midfielder Christian Eriksen, 27, is closing in on a move to Inter Milan. (Ekstra Bladet, in Danish)

Borussia Dortmund will not consider selling England winger Jadon Sancho, 19, to Chelsea until at least the end of the season and the Blues will also have to wait to sign RB Leipzig's Germany forward Timo Werner, 23. (Goal.com)

Who suffered the worst injuries over the Christmas period?

Which team came off worst from the busy festive schedule?

Atletico Madrid coach Diego Simeone has not ruled out 24-year-old France midfielder Thomas Lemar - who has been linked with Tottenham and Arsenal - leaving the club. (Mirror)

Besiktas want to keep German goalkeeper Loris Karius, 26, on loan from Liverpool for the 2020-21 campaign. (Fanatik, in Turkish)

Manchester United's England midfielder Jesse Lingard, 27, and France forward Anthony Martial, 24, were sent home from training on Friday after being struck down with illness just 15 minutes after arriving. (ESPN) 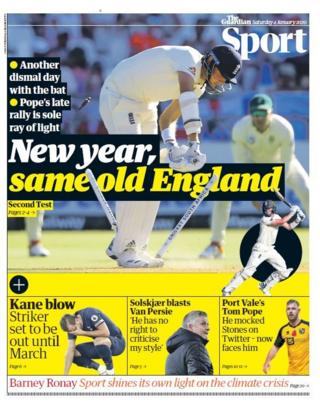