Argentine striker Mauro Icardi, 27, is set to make his move to Paris St-Germain permanent after a deal worth £51.2m was agreed with Inter Milan. (Sky Sports)

Former Manchester City captain Vincent Kompany, 34, turned down the opportunity to return to the club as assistant manager to Pep Guardiola shortly after he left to become a player-manager at Anderlecht. (Sun)

AC Milan have shown an interest in signing Burnley and Republic of Ireland midfielder Jeff Hendrick, 28, on a free transfer. (Sky Sports)

The agent of Borussia Dortmund's 21-year-old right-back Achraf Hakimi, on loan from Real Madrid, says playing at the Spanish club is the player's priority - but has claimed there is no hurry for the Moroccan to return. (Evening Standard)

'I could hardly walk'

Birmingham City manager Pep Clotet expects attention on teenage midfielder Jude Bellingham to increase if the Championship gets back under way, with Manchester United and Borussia Dortmund heavily linked to the 16-year-old. (Sky Sports)

Arsenal have completed the signing of the unattached Rwanda-born winger George Lewis, 19, who is also eligible to represent Norway (VG - in Norwegian)

Arsenal have also renewed their transfer interest in Lyon and French striker Moussa Dembele, 23, and have made contact with his representatives. (L'Equipe - in French)

Manchester United will step up their interest in the Lyon striker too with his value now likely decreasing. (Star)

Arsenal are set to made redundant up to 10 scouts, who helped discover the likes of 20-year-old striker Reiss Nelson and 18-year-old winger Bukayo Saka, from the club's academy as part of cost-cutting measures caused by the coronavirus crisis. (Mail) 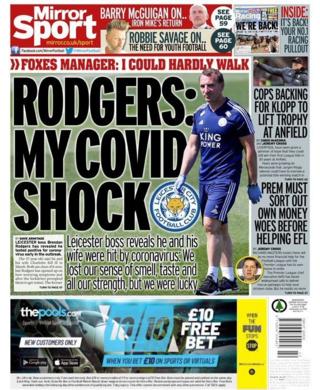