Meanwhile, the Blues are preparing a bid for Flamengo's Brazilian midfielder Gerson, 23, in a deal that would also benefit his former club Roma. (Corriere dello Sport - in Italian)

Barcelona and Brazil midfielder Philippe Coutinho - currently on loan at Bayern Munich - is likely to move to the Premier League. Tottenham and Everton are interested in the 27-year-old while his representatives have also been in touch with Newcastle. (France Football - in French)

Shamed, sacked and back

Scotland midfielder Ryan Fraser, 26, is set to reject the offer of a short-term Cherries deal, meaning he can leave for free in summer. (Sun)

The chances of Chris Hughton returning to manage Birmingham are slim. (Birmingham Mail)

Manchester United will face West Brom in two games at Old Trafford on Friday, as they prepare for the return of the Premier League. (Telegraph)

Villarreal's Spanish midfielder Santi Cazorla, 35, says he has made a decision on his future - but is not revealing anything yet. The former Arsenal player is out of contract this summer. (Cadena Ser, via Mirror)

Leicester are set to become the latest Premier League club to inject further funds into their women's team with the aim of promotion from the Championship - the second tier of women's football. (Times - subscription required)

Real Madrid's chiefs have politely turned down the offer of playing their final six home games at the Wanda Metropolitano - the stadium of rivals Atletico Madrid. Real's home the Santiago Bernabeu is being redeveloped. (Marca) 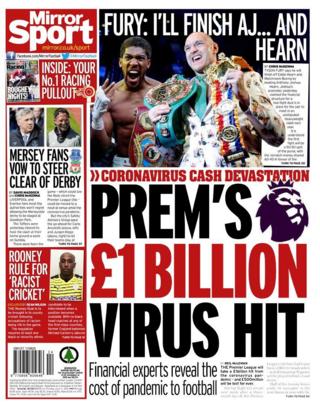