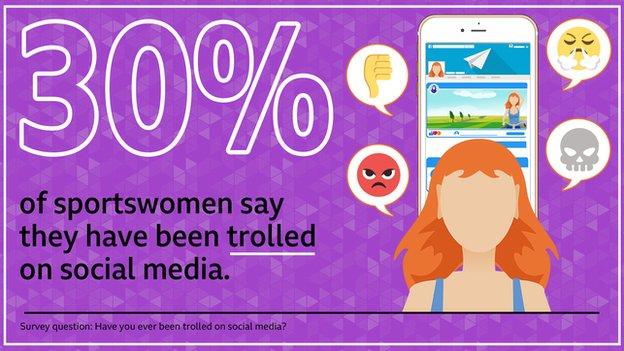 Elite British sportswomen have spoken out about "horrific abuse" on social media, telling a BBC Sport survey about constant comments on their appearance and sexist remarks questioning their right to play sport.

Almost a third of respondents to the biggest women's sport study ever carried out by BBC Sport had been trolled - a figure that has doubled since the last survey in 2015.

Some athletes had received inappropriate images and described the abuse as "threatening" and "scary".

As a result of the findings, BBC Sport has strengthened its stance on combating hate speech on its social media channels.

We have committed to blocking people bringing hate to our comments sections; we will report the most serious cases to the relevant authorities and we will work to make our accounts kind and respectful places.

Minister for Sport Nigel Huddleston told BBC Sport: "The past few years have seen fantastic progress with women's sport starting to get the profile it deserves.

I was sent an image of a club crest full of ironing boards and told this was the team I should play for.

"However, it is absolutely unacceptable that this visibility has been matched by a rise in online abuse of our sports stars.

"We have set out world-leading plans that will make online platforms safer for users, and we will continue to engage with providers to see what more can be done."

The BBC Elite British Sportswomen's Survey was sent to 1,068 women in 39 different sports and received 537 responses.

It is the third time BBC Sport has carried out the extensive research, having first gauged opinions in 2013.

One hundred and sixty sportswomen - 30% of respondents - said they had been trolled on social media, up from 14% in 2015. 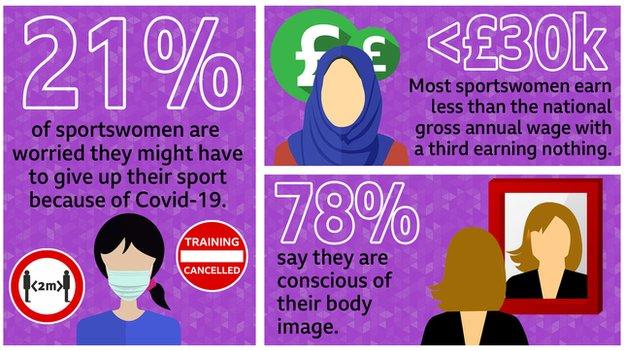 In their frank answers, sportswomen spoke honestly about a wide range of issues they have to combat daily.

These include sexism, racism and ignorance around concerns not faced by male coaches, such as periods and the contraceptive pill.

Tammy Parlour, chief executive of the Women's Sport Trust, told BBC Sport: "We have seen a lot of positive momentum in women's sport over the last five years, but this is a stark reminder that there is still so much more to be done.

"It's crucial to see these results as symptoms of the wider system, understand what is creating this environment, and address the underlying causes." 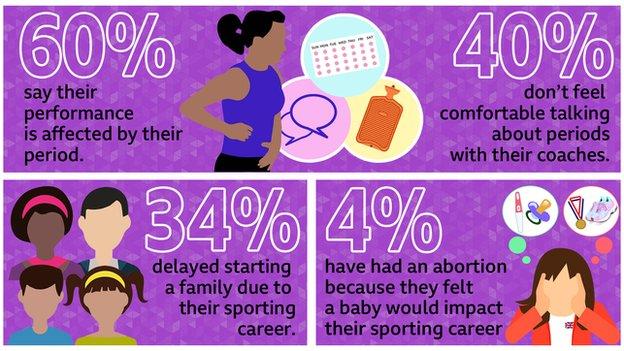 'I hope you die of cancer' - Sportswomen share trolling stories

Abuse directed at sportswomen on social media was frequently about body image, performance or telling athletes to "get back in the kitchen". One sportswoman even received an image of her club's crest full of ironing boards.

One respondent described the abuse she received after a poor performance in competition as "horrific" and admitted she considered giving up her sport.

Darts player Deta Hedman received racial abuse after losing a match and was told by someone that they "hope you die of cancer".

One woman said she received comments on Twitter about her ethnicity, saying she is "not really British".

Another athlete, who is a size six, had been called "too fat" while someone else described being featured on a profile that had been created purely to pick out women's flaws. Her photo was posted with the muscle in her legs chosen as the flaw.

One respondent received the comment "women shouldn't look like this" on one of her Instagram posts, another was told she is "too tall" and a third was denigrated for having "big shoulders".

Someone created a fake profile that posted pictures of different girls and picked out their flaws. My profile was posted on there and I was highlighted for the muscle in my legs.

A jockey was told by a man after a fall that he "hoped the horse was OK and not you", adding that "a man should have been on it".

Several athletes said the same person liked and commented on all their posts or direct messaged them, behaviour one sportswoman described as "threatening". 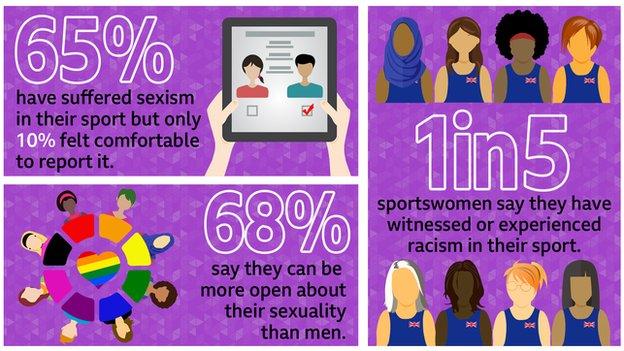 We did not receive responses from equestrian, gymnastics, motorsport, shooting and taekwondo.

Social media trolling is one of many issues raised by the BBC Elite British Sportswomen's Survey. BBC Sport will be shining a spotlight on the others with coverage throughout the week on the BBC Sport website, BBC Radio 5 Live and BBC TV. More information can be found here.