Arsenal face a wait to begin talks with Barcelona midfielder Philippe Coutinho, 28, because the Brazil international - on loan at Bayern Munich - wants to focus on winning the Champions League first. (Star)

Manchester United's English goalkeeper Dean Henderson, 23, looks set to spend another season out on loan after manager Ole Gunnar Solskjaer admitted he will not be able to keep all of the club's keepers happy. (Standard)

But is he the perfect fit?

Liverpool have agreed a £11.75m fee with Olympiakos for Greece left-back Kostas Tsimikas, 24, but have yet to agree personal terms with the player. (Liverpool Echo)

Tsimikas is expected to sign a four-year contract worth £50,000 a week at Anfield. (Guardian)

Tsimikas' potential move to Liverpool is a blow to Leicester, who had lined him up as a replacement for Ben Chilwell, 23, should the England left-back leave to join Chelsea this summer. (Leicester Mercury)

Tsimikas was Liverpool's third-choice left-back option, with Real Madrid Spaniard Sergio Reguilon among those being monitored by the Premier League champions. (Star)

Danish midfielder Pierre-Emile Hojbjerg will have a medical at Tottenham on Monday before a move from Southampton. (Sky Sports)

Sheffield United are hoping to sign United States left-back Antonee Robinson from Wigan for just £1.5m after the Latics' relegation to League One was confirmed. (Sun)

Goalkeeper Emiliano Martinez, 27, has warned Arsenal he may need to leave to get more playing time in order to secure a spot in the Argentina team. (Continental, via Evening Standard)

Leeds want to make five signings for next season in the Premier League, including Slavia Prague and Romania forward Nicolae Stanciu, 27, and Chelsea's English midfielder Conor Gallagher, 20, who spent the second half of last season on loan at Swansea. (Mail)

Colombia centre-back Yerry Mina, 25, has reaffirmed his commitment to Everton amid speculation about his future after he changed agents. (Liverpool Echo)

Arsenal are ready to pay off the £18m remaining on Germany midfielder Mesut Ozil's contract, which runs for another year, or subsidise the 31-year-old's £350,000-a-week wages if he moves to another club. (Mirror)

Brazil midfielder Willian, 32, will sign a three-year deal at Arsenal, with the option of a further 12 months, after leaving Chelsea. (Telegraph - subscription required)

Juventus have abandoned plans to sign Jorginho, 28, from Chelsea and will instead target fellow Italy midfielder Sandro Tonali, 20, from Brescia. (La Gazzetta dello Sport, via Mail)

Sevilla sports director Monchi says it will be difficult for his side to re-sign Croatia midfielder Ivan Rakitic, 32, from Barcelona this summer. (Diario de Sevilla, via Evening Standard)

Manchester United midfielder Dylan Levitt is set to be sent out on loan for next season, with the 19-year-old Welshman likely to move to a Championship club. (Manchester Evening News) 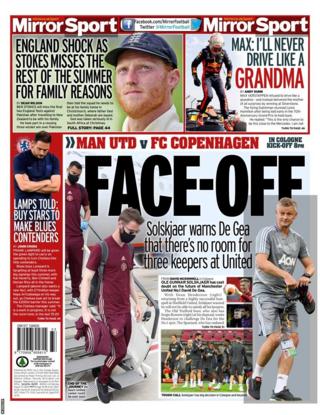 The back page of Monday's Mirror