Paris St-Germain and Manchester United are in position to sign Lionel Messi after the Argentine forward, 33, told Barcelona he wants to leave - and both would be willing to pay a fee. (Sport - in Spanish)

Messi decided to hand in a transfer request after he was told "your privileges in the squad are over" by new Barcelona boss Ronald Koeman. (Diario Ole via Mail)

Thiago Silva, 35, is set to have a Chelsea medical on Thursday, despite a late attempt by Paris St-Germain to offer the Brazilian defender a new deal. (Sky Sports)

Philippe Coutinho would prefer to return to the Premier League than stay with Barcelona - with Manchester United, Arsenal and Chelsea interested in the 28-year-old Brazilian midfielder. (Marca)

Arsenal are set to walk away from a deal to sign £45m-rated Ghanaian midfielder Thomas Partey, 27, from Atletico Madrid this summer. (Sport via Express)

Everton are in talks over a deal for Real Madrid midfielder James Rodriguez, 29, with boss Zinedine Zidane keen for him to leave the club. (Talksport)

Newcastle United are interested in bringing Arsenal centre-back Rob Holding, 24, in on loan and the Gunners are open to offers for the Englishman. (Mail)

Where could Messi go next?

Crystal Palace have agreed a £14m fee for QPR midfielder Eberechi Eze, beating a late bid from West Brom for the English 22-year-old after Fulham pulled out. (Sun) 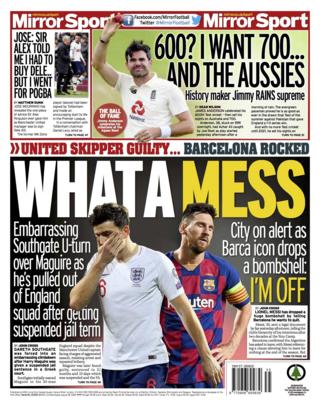