Barcelona forward Lionel Messi, 33, is considering a U-turn over his decision to leave the club. (TyC Sports, via Mirror)

Messi's father and agent, Jorge, is set for a second day of talks with Barcelona after both parties failed to reach an agreement on Wednesday. (Sky Sports)

Barcelona president Josep Maria Bartomeu also said the club will not negotiate for the sale of the Argentine forward, 33. (Marca)

Manchester United have made an offer to sign Real Madrid's 23-year-old Spanish left back Sergio Reguilon. (AS - in Spanish)

United have also been invited to negotiate with Bayern Munich for Spain midfielder Thiago Alcantara, 29. (ESPN)

English goalkeeper Dean Henderson, 23, has warned United that he will leave the club if he plays second fiddle to David de Gea, despite signing a new contract at Old Trafford until 2025. (Mail)

New Barcelona boss Ronald Koeman wants the club to do whatever it takes to sign Liverpool and Netherlands midfielder Georginio Wijnaldum, 29. (ESPN)

Newcastle are also close to completing the signing of Scotland and former Bournemouth winger Ryan Fraser, 26, on a free transfer. (Talksport)

Where does Donny fit?

How do Manchester United plan to use their new signing?

DC United have made an approach for Juventus forward Gonzalo Higuain, 32, and are interested in Everton's Icelandic midfielder Gylfi Sigurdsson, 30. (The Athletic - subscription required)

Argentina international Higuain also has offers from France, England, Spain and China, according to the player's agent. (Tuttosport - in Italian)

Spain defender Eric Garcia, 19, says he will leave Manchester City when his contract expires at the end of the season. (Sun)

West Brom have stepped up their pursuit of England Under-21 winger Grady Diangana, by offering West Ham a deal that could rise to £18m with add-ons. The 22-year-old was on loan at the Baggies last season as they won promotion back to the Premier League. (Guardian)

Arsenal full-backs Ainsley Maitland-Niles and Kieran Tierney, both 23, will now stay at the club after boss Mikel Arteta made it clear he wanted both to be a part of his squad. (90mins)

West Ham and England midfielder Declan Rice, 21, has been urged to stay at the club by an unlikely source... WWE wrestler Triple H. (BT Sport) 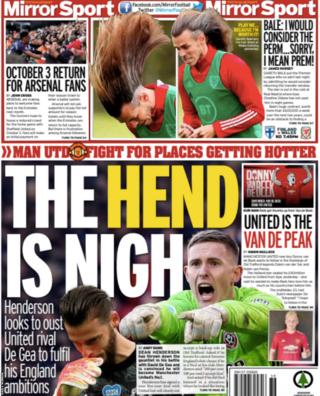