Liverpool are looking to use forward Sadio Mane to persuade fellow Senegal international Kalidou Koulibaly to join from Napoli, despite Manchester City and Paris St-Germain being interested in the 29-year-old defender. (Le Parisien, via Sun)

Roma are expected to make a second bid for Manchester United's 30-year-old England centre-back Chris Smalling, who the Serie A side had on loan last season. (Guardian)

Aston Villa are keen to bring in England and Chelsea midfield duo Ruben Loftus-Cheek, 24, and Ross Barkley, 26, on loan, but can only choose one because of Premier League rules. (Mail)

From Deadpool to the Red Dragons?

Arsenal have renewed their interest in Barcelona and Brazil attacking midfielder Philippe Coutinho, 28. (Sport - in Spanish)

West Ham have made a bid worth up to £33m for Saint-Etienne's 19-year-old French centre-back Wesley Fofana, who has also attracted interest from Leicester City. (Sky Sports)

Burnley are in talks with Liverpool over a move for the Reds' Wales winger Harry Wilson, 23. (Independent)

Lazio have reached an agreement with Southampton for Dutch defender Wesley Hoedt, 26, to return to the Italian club on loan. (Sky Sport Italia - in Italian)

Bayern have contacted Mario Gotze about rejoining the club. The German forward, 28, is a free agent after leaving Borussia Dortmund at the end of last season. (Sport Bild - in German)

Atletico Madrid's Colombian right-back Santiago Arias, 28, has arrived in Germany to have a medical with Bayer Leverkusen. (Marca)

Atletico Madrid will only sign Uruguay forward Edinson Cavani, 33, from Paris St-Germain, if they can offload Spain striker Diego Costa, 31. (L'Equipe - in French) 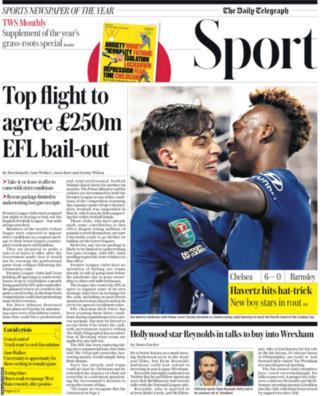