Tottenham Hotspur have rejected a £1.5m loan offer from Paris St-Germain for England midfielder Dele Alli and the 24-year-old is set to stay at the north London club. (Guardian)

But the Ligue 1 club could be preparing a final loan bid for Alli. (Telegraph - subscription required)

Spurs have also made a loan bid for Chelsea and Germany defender Antonio Rudiger, 27, with talks ongoing. (Nicolo Schira, via Express)

Arsenal have agreed a deal for Uruguay midfielder Lucas Torreira, 24, to join Atletico Madrid on loan and that will allow them to sign 22-year-old midfielder Houssem Aouar from Lyon. (AS - in Spanish)

PSG could hamper the Gunners' pursuit of Aouar after also entering into negotiations over a deal for the Frenchman. (L'Equipe - in French)

Phil McNulty on why the players left out of the England squad are as notable as those included...

Leicester City are open to offers for 24-year-old English winger Demarai Gray, who is in the final year of his contract with the club. (Mirror)

Bayern Munich are in talks with Chelsea over a loan deal for Callum Hudson-Odoi, having failed to sign the 19-year-old England winger on a permanent deal last year. (Bild - in German, subscription required)

Roma are close to a permanent deal for Chris Smalling. Manchester United want about £20m for the 30-year-old England centre-back, who spent last season on loan at the Italian club. (The Athletic - subscription required)

The Cottagers have also made a bid of about 15m euros (£13.7m) for Barcelona centre-back Jean-Clair Todibo, with the 20-year-old Frenchman now deciding whether to move. (ESPN Deportes - in Spanish)

Barcelona are hoping to use the money raised by selling Todibo on a move for Manchester City centre-back Eric Garcia and the Catalan club have submitted another offer for the 19-year-old Spain international. (SER Catalunya, via AS)

Leeds United have pulled out of a deal for Bayern Munich midfielder Michael Cuisance after the 21-year-old failed his medical. (The Athletic - subscription required) 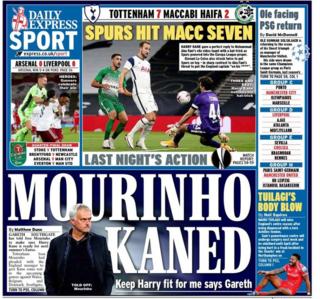