Portugal forward Cristiano Ronaldo, 36, is more likely to rejoin Manchester United than return to Real Madrid if he leaves Juventus this summer. (Tuttosport - in Italian)

Sporting Lisbon's Portugal Under-21 winger Pedro Goncalves, 22, has been identified by Manchester United as a cheaper alternative if they fail to bring 20-year-old England international Jadon Sancho to Old Trafford from Borussia Dortmund. (Telegraph - subscription required)

Manchester United's pursuit of Sevilla defender Jules Kounde, 22, has been boosted with the Spanish club lowering their asking price for the Frenchman to around £50m. (Sun)

Zlatan Ibrahimovic reverses retirement and is recalled by Sweden aged 39

Arsenal midfielder Matteo Guendouzi, 21, says he will work hard to get back in boss Mikel Arteta's plans after his loan deal at Hertha Berlin finishes at the end of this season. (France Football - in French)

Tottenham are keen to offload 24-year-old Colombia international Davinson Sanchez in the summer and are already looking for a replacement for the centre-back. (Football Insider)

Chelsea have been linked with a move for Palmeiras' 20-year-old Brazilian midfielder Gabriel Menino, who is also wanted by Atletico Madrid. (UOL, via Sport Witness)

Former Leicester right-back Danny Simpson, 34, is on trial with Championship side Sheffield Wednesday as he bids to find a new club after leaving Huddersfield last summer. (Leicester Mercury)

Forward Zlatan Ibrahimovic, 39, could follow up the reversal of his international retirement with Sweden with a new deal with AC Milan. (Calciomercato - in Italian)

Norwich City have been linked with a move for 26-year-old German centre-back Sebastian Schonlau, whose contract with Bundesliga 2 side Paderborn expires in the summer. (Westfalen Blatt, via Eastern Daily Press)

Hibernian have told 16-year-old striker Ethan Laidlaw that he will be allowed to move to the Premier League, with the Scot having already spent time on trial with Leeds United. (Football Insider) 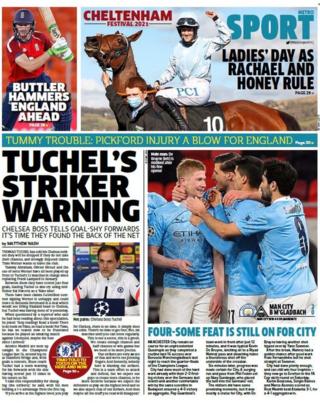