Manchester United are preparing to start contract talks with in-form left-back Luke Shaw, with the 25-year-old Englishman enjoying his best run of form at the club. (Mirror)

The Netherlands midfielder Georginio Wijnaldum, 30, has agreed a pre-contract deal to join Barcelona on a free transfer when his Liverpool contract expires this summer. (Times - subscription required)

Everton and England goalkeeper Jordan Pickford, 27, may not play again this season because of a side strain, putting his participation in this summer's European Championships in doubt. (Sun)

Chelsea defender Antonio Rudiger, 28, has told the club he is not interested in opening talks over a new contract until after Germany's involvement in Euro 2020. (Athletic via Mail)

Tottenham and Arsenal have been approached to see if they have any interest in signing Real Madrid's Spanish winger Lucas Vazquez, 29, from Real Madrid. (Mirror)

Manchester United manager Ole Gunnar Solskjaer is doing everything to keep Uruguayan striker Edinson Cavani, 34, at Old Trafford next season despite him tipped for a move to Argentina and Boca Juniors. (Mirror)

Former Sheffield United boss Chris Wilder could be set for a quick return to management with West Brom in the summer. (Star)

Liverpool are in advanced talks with former Real Madrid defender and ex-Argentina international Ezequiel Garay, 34, who is a free agent after leaving Valencia last summer. (El Gol Digital, via Express)

Sevilla are keen to sign Tottenham's Colombian centre-back Davinson Sanchez, 24, as a potential replacement for 22-year-old Frenchman Jules Kounde, who is wanted by both Manchester United and Arsenal. (Team Talk)

Napoli's efforts to reduce their wage bill means they will consider selling 29-year-old defender Kalidou Koulibaly for less than the £69m asking price previously set for the Senegal international, who has been linked with Liverpool and Manchester United. (Gazzetta dello Sport, via Express)

Borussia Dortmund are willing to sell 24-year-old Germany midfielder Julian Brandt, who has previously been linked with a move to Arsenal, for £21.5m in the summer. (Bild, via Team Talk)

'A spectacular symbol of a golden era at Leeds'

Midfielder Matteo Guendouzi will return to Arsenal in the summer when his loan deal at Hertha Berlin comes to an end, with the German club deciding not to sign the 21-year-old Frenchman on a permanent deal. (Bild, via Mirror)

Leeds United are keen to offload Portugal forward Helder Costa in the summer and will listen to offers for the 27-year-old. (Football Insider)

Brazil forward Neymar, 29, is close to agreeing a contract extension with Paris St-Germain, with the new deal running until 2026. (Mercato, via Mail)

Barcelona want to move Brazilian midfielder Philippe Coutinho on in the summer and will consider loan offers for the 28-year-old. (Mundo Deportivo - in Spanish)

AC Milan have made contact with Benfica over a potential £43m move for 21-year-old Uruguay striker Darwin Nunez. (Calcio Mercato - in Italian) 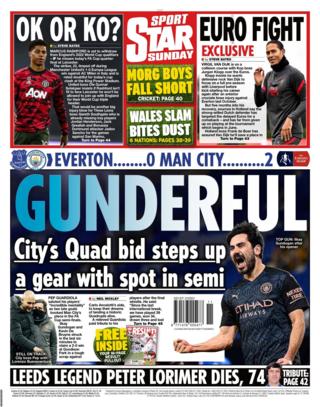 The Star on Sunday