Atletico Madrid's Spanish forward Diego Costa, 32, will play for Benfica next season after reaching an agreement with the Portuguese club. (Mundo Deportivo - in Spanish)

Real want to bring Spanish attacker Brahim Diaz, 21, back to the club following his loan spell at AC Milan. (Calciomercato - in Italian)

However, they are not interested in the return of Juventus' Portuguese forward Cristiano Ronaldo, 36. (COPE - in Spanish)

Villarreal's 24-year-old Spanish defender Pau Torres would be interested in a move to Manchester United this summer. (Manchester Evening News)

The appointment of John Murtough as football director at Manchester United was a factor in the club's former midfielder, Nicky Butt, leaving the coaching staff of the Old Trafford outfit. (Athletic - subscription required)

Liverpool midfielder Georginio Wijnaldum says he has "no news", despite reports the 30-year-old Netherlands international has agreed to join Barcelona when his Reds contract runs out in the summer. (Metro)

Arsenal and Chelsea were interested in signing Spain defender Eric Garcia but the 20-year-old has agreed to return to Barcelona when his contract with Manchester City runs out in the summer. (Star)

Tottenham could consider offers for Argentina forward Erik Lamela in the summer, with Serie A side Bologna interested in the 29-year-old, whose Spurs contract runs out in 2022. (Star)

French forward Antoine Griezmann, 30, wants to stay and prove himself at Barcelona. (Radio Catalunya via AS)

Uefa is preparing to get rid of Financial Fair Play regulations to allow teams greater control over their finances. (La Gazzetta dello Sport via Mail) 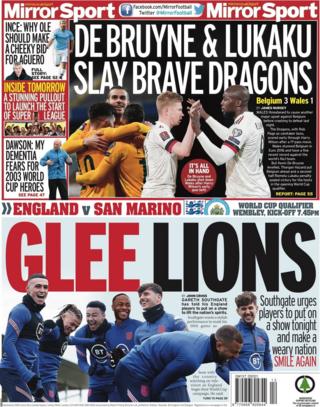