Wales forward Gareth Bale is not in Real Madrid's plans for next season, despite the 31-year-old saying he plans to return to the Spanish club at the end of his season-long loan at Tottenham. (Marca)

England captain Harry Kane says he will not make any decision on his Tottenham future until after the Euros this summer. The striker, 27, has been linked with Real Madrid and Manchester City. (Sky Sports)

Talks over a new contract between Manchester City and England winger Raheem Sterling have been put on hold until the summer, with the 26-year-old's change in agent believed to be part of the reason. (Star on Sunday)

City had begun talks with Sterling over a new £320,000-a-week contract and are also speaking to Belgian midfielder Kevin de Bruyne, 29, and Brazilian forward Fernandinho, 35, about new deals. (Sunday Sun)

Manchester United could make a move for Watford and Senegal winger Ismaila Sarr, 23, instead of Borussia Dortmund's 21-year-old England forward Jadon Sancho if they succeed in signing Erling Braut Haaland from the German side. (Sunday Express)

Inter Milan will listen to offers for Belgian striker Romelu Lukaku, 27, if they are able to sign Manchester City and Argentina striker Sergio Aguero, 32. (Star on Sunday)

Manchester City will have to pay £103m if they want to sign Atletico Madrid's Spanish midfielder Marcos Llorente, 26. (Marca, via Metro)

Real Madrid will sell or loan out 22-year-old Norway midfielder Martin Odegaard, who is on loan at Arsenal, if Zinedine Zidane stays on as the Spanish side's manager. (Football Insider)

Arsenal fear Odegaard's price could rise to £50m by the summer, while the likes of Chelsea, Liverpool and PSG could enter the fray for the Real Madrid playmaker. (Star on Sunday)

Uruguay assistant coach Mario Rebollo says it would help the national team if the country's 34-year-old striker Edinson Cavani, who is at Manchester United, "goes to Boca [Juniors] or wherever". (Sunday Mirror)

Several Newcastle United players have been angered by 27-year-old Paraguay team-mate Miguel Almiron's comments that he would like to "play in a team that fights more". (Football Insider)

Bosnia midfielder Miralem Pjanic has struggled for first-team football at Barcelona but the 30-year-old does not intend to leave the Nou Camp. (Mundo Deportivo)

Chile midfielder Arturo Vidal's agent says there have been offers made for the 33-year-old but he will be staying at Inter Milan. (Goal) 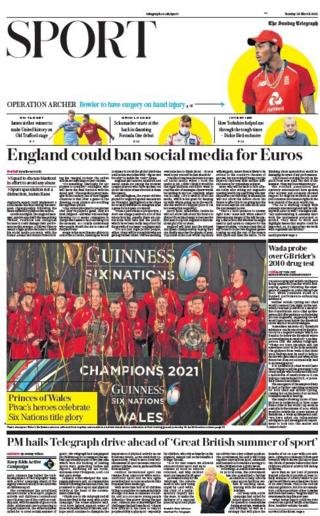 The front page of the Sunday Telegraph sport section