Real Madrid's Norwegian midfielder Martin Odegaard, 22, who is currently on loan at Arsenal, has emerged as a transfer target for Chelsea and Liverpool. (AS - in Spanish)

Arsenal want to keep Odegaard but have a couple of concerns over the prospects of a permanent deal. (Express)

Germany international Thomas Muller, 31, who has been a target for Manchester United in the past, says he would have "no problem" quitting Bayern Munich. (Times - subscription required)

Juve are willing to use Dybala, whose contract runs out in June 2022, as part of a swap deal for a number of targets, including Manchester United and France midfielder Paul Pogba, 28. (Football Italia)

Manchester United missed out on signing Dembele last summer but remain interested in the player and are in touch with his entourage. (Sport)

France keeper Hugo Lloris, 34, is unlikely to leave Tottenham this summer, despite his current deal coming to an end in summer 2022. (Football London)

Liverpool will prepare a £15m bid to try to sign Turkey goalkeeper Ugurcan Cakir from Trabzonspor, with RB Leipzig and Sevilla also interested in the 24-year-old. (Express)

Former Arsenal defender Bacary Sagna says he "would not be surprised" if Spain right-back Hector Bellerin, 26, left the Gunners. (Goal)

Serb Aleksandar Kolarov, 35, could leave Inter Milan at the end of the season, with Bologna one of five clubs interested in signing the ex-Manchester City defender. (Tuttosport - in Italian)

Real Madrid and Germany midfielder Toni Kroos, 31, is set to retire from internationals after this summer's European Championships. (Marca) 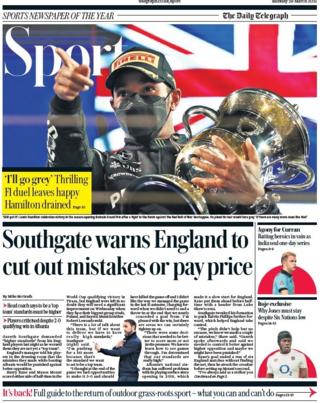 The front page of the Daily Telegraph sport section