Liverpool face a conundrum over Egyptian forward Mohamed Salah with figures inside the club increasingly convinced the 28-year-old is eyeing a future elsewhere. (ESPN)

Manchester United and Chelsea are both keen on a move for Real Madrid's Spanish winger Lucas Vazquez, 29. (ABC)

Chelsea are eyeing a move for Argentine striker Sergio Aguero, 32, when he leaves Manchester City this summer if they cannot win the race to sign Norway striker Erling Haaland, 20, from Borussia Dortmund. (ESPN)

Real Madrid are ready to sell midfielder Martin Odegaard in order to fund a move for Haaland. Odegaard is currently on loan at Arsenal and the Gunners are keen to secure a permanent deal for the 22-year-old. (Times)

But Haaland has reportedly told Real Madrid he wants to share a dressing room with Odegaard next season. (Star)

Barcelona view Inter and Argentina forward Lautaro Martinez, 23, as a likely option if a move for Haaland does not come to fruition. (Sport)

Barcelona could end their pursuit of Liverpool's Dutch midfielder Georginio Wijnaldum, 30, and instead hand 18-year-old Spanish starlet Ilaix Moriba a key role in the side next season. (Metro)

Nigeria forward Kelechi Iheanacho, 24, is expected to sign a new deal at Leicester this summer. (Mail)

Juventus want to bring back Everton's Italy forward Moise Kean, who is currently on loan at Paris St-Germain. The 21-year-old joined the Toffees from Juve in 2019. (Tuttosport - in Italian)

Tottenham manager Jose Mourinho believes England striker Harry Kane, 27, is happy with his situation for club and country amid speculation over a summer move. (Standard)

Inter want to keep Belgium international striker Romelu Lukaku but a bid of £102m may force them into selling the 27-year-old. (Corierre dello Sport)

Former Chelsea and England midfielder Joe Cole is in contention to be the new England Under-21 boss if Aidy Boothroyd is sacked. (Sun) 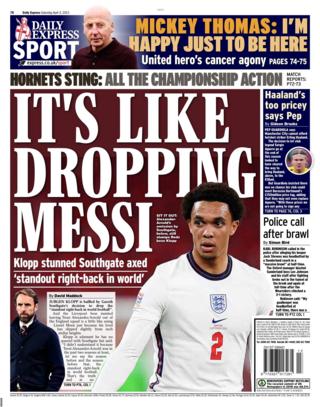