England striker Harry Kane, 27, will push to leave Tottenham Hotspur in the summer if they fail to qualify for next season's Champions League. (Athletic - subscription required)

Agent Mino Raiola is planning to make Borussia Dortmund striker Erling Braut Haaland, 20, the first £1m-a-week player. This could rule out a number of clubs who are interested in the Norway forward, although Manchester City and Paris St-Germain could raise the funds. (Sunday Mirror)

Atletico Madrid forward Luis Suarez has been linked with a move back to Liverpool, seven years after the Uruguay striker left the Merseyside club. David Beckham's Inter Miami in the US have also been named as a potential destination for the 34-year-old. (Todofichajes, via Sun on Sunday)

Liverpool have made their interest in Barcelona Pedri known, prompting the Catalan club to offer the 18-year-old Spain midfielder a new deal with a release clause of around £350m. (Sunday Mirror)

Manchester United have added Wolverhampton Wanderers' Ruben Neves, 24, to their list of transfer targets, with the Midlands club prepared to sell the Portugal midfielder. (90min)

West Ham United want to sign Manchester United's Jesse Lingard, 28, on a permanent deal, but face competition from Arsenal. The England attacking midfielder has been on loan with the Hammers since January. (Sunday Star)

Real Madrid consider themselves a leading contender to sign World Cup winner Mbappe in the summer. (AS)

Wolves are poised to make a move for Valencia forward Goncalo Guedes, 24, and are considering offering 23-year-old Italian Patrick Cutrone, who is already on loan with the Spanish club, in a part-exchange for the Portugal striker. (Football Insider)

Everton and Italy striker Moise Kean, 21, who is on loan with Paris St-Germain, has been linked with a possible return to Juventus. (Tuttosport - in Italian)

The man who 'transformed' Leeds

Boss Bielsa has worked wonders at Leeds, but will he remain beyond the summer?

Manchester United and Leeds have joined the race to sign 18-year-old centre-back Kyron Gordon from Sheffield United. Everton and Liverpool have also been linked with the English teenager. (Mail on Sunday)

Arsenal have made an approach for Fluminense's 19-year-old Brazilian midfielder Matheus Martinelli, who is also wanted by Manchester United. (Globo Esporte, via Football London)

Everton boss Carlo Ancelotti has made Napoli's Senegal defender Kalidou Koulibaly, 29, his number one target as Colombia centre-back Yerry Mina, 26, pushes for a move to Italy's Serie A. (Tuttomercatoweb, via Mail on Sunday)

The Italian manager, however, has played down rumours linking the Toffees with Koulibaly, who played under the 61-year-old in Naples. (Liverpool Echo) 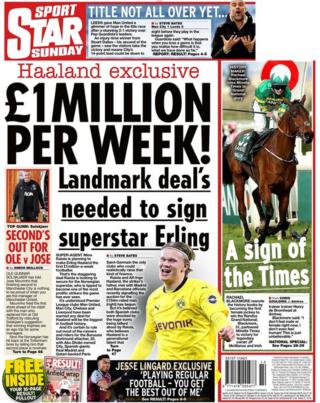 Back page of the Daily Star