Climate change, and the warmer winters it will create, has cast doubts on the future of winter sports as we know them.

Winter snow sports are facing an existential threat, industry experts say, with new data showing the most recent winter of 2049 was the warmest on record in both the northern and southern hemispheres.

The rise in temperatures caused unprecedented cancellations of both skiing and snowboarding events across the globe and just last week, Chamonix in France became the latest former Winter Olympic host city to announce a partial closure of its facilities.

The town was the location of the first ever Winter Olympics, in 1924, and is being seen as a hugely symbolic loss to add to what some say is worrying news around record seasonal temperatures.

"There was so much pride in the history we have here and it is with a very heavy and sad heart that we now feel we have to re-purpose much of our winter sports facilities," the town's mayor Veronique Badeaux told the BBC.

"The continuing climate change has meant that our winter season has shortened dramatically year on year, this season saw a thawing midway through the season with rain affecting snow quality too.

"With temperatures higher, even the use of fake snow becomes difficult and although technology has improved and is powered by renewable energy, we just couldn't justify the water usage when other parts of France were experiencing drought during the summer."

What is the impact on elite level sport?

The record warm temperatures have seen a chaotic professional snow sport season. It has been standard practice for some time to have standby locations in case some venues could not host events because of weather conditions, but this season has seen a record number of competitions moved and some locations have had to host multiple events.

"It is draining, you don't know where you are going to be from one moment to the next and all the moving around by plane cannot be great for the environment. I worry how much longer the season can continue in its current form," British ski cross athlete Georgie Grace said.

The International Ski Federation (FIS) acknowledged the challenges and said it was "looking at possible solutions to the scheduling chaos that happened this year - it may be that some tough choices have to be made".

It went on to thank all athletes and organisers at every level for their patience and said that although some events were not able to go ahead, the fact the season was completed despite such difficult climatic conditions was "testimony to the patience and hard work of all involved". 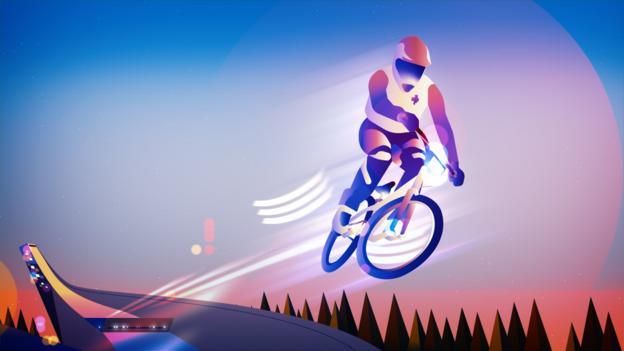 Unable to guarantee quality snow, many resorts have seen their bookings disappear as visitors head to resorts at higher altitudes or more northern latitudes. Many businesses have suffered and gone bankrupt but some have tried to adapt.

In Garmisch-Partenkirchen, another former Winter Olympic venue, the manager of the Ski Chalet Bavaria, Uta Huber, told the BBC: "We have to make changes otherwise like so many small hotels and individual chalet operators we may not survive.

"Some towns which were once seasonal winter resorts are now on the verge of closing down completely and becoming effectively like ghost towns," she added.

Estimates vary about the number of jobs that have already been lost but there is real fear in the communities that worse is yet to come, according to Bavaria Tourism.

"Even if we can re-purpose some of the tourist infrastructure like hotels, there are many support industries associated with skiing such as instructors and lift manufactures, equipment shops that will still be lost," a spokesperson said.

How have rising temperatures affected participation?

The reduced winter season and fewer venues across the planet has seen winter sports fall victim to the traditional problems of supply and demand.

The cost of skiing holidays in resorts that are still viable has increased and made it much less affordable for many, while the issue of emissions from international air travel has also meant people are less able to travel far for their skiing.

This has contributed to a dramatic fall in snow sports participation with some former athletes speculating that as the elite level melts away, we may either have to see a Winter Olympics without real snow, or the International Olympic Committee (IOC) may be forced to move to a single host city which would stage all future editions of the Winter Olympics in an effort to preserve the 126 year history of the Games.

As one insider said: "We have got to do something. Sadly the situation doesn't look like it is going to get better any time soon."

For many regions of France, northern Italy, Switzerland, Austria, Germany, the Nordic Countries, Scotland and North America, winter sports are not just about competitions for elite athletes; they're an economic accelerator and a national cultural centrepiece.

The Winter Olympics are the pinnacle event for winter sports. And yet, the number of cities eligible to host, from a climactic perspective, is declining.

Vancouver 2010 famously had green slopes at Cypress Mountain, and brought in snow by the truckload to host ski events. The problem of insufficient snow resurfaced in Sochi 2014, and based on some new research, will likely pop up in Beijing next year.

Both the 2020 Finlandia Ski Marathon and the 2021 Can-Am Pond Hockey Tournament were cancelled because the weather was too warm, with the thin ice at the latter swallowing a snow-clearing tractor.

In other cases, disruptions in winter sport are caused by too much snow. This past February, the Alpine Skiing World Championships in Cortina, Italy, the site of the 2026 Winter Olympics, were hit by a snowstorm so dramatic that races were postponed for two consecutive days.

These heavy snowfall events are becoming more common in some areas because the warming temperatures globally cause more water to evaporate, adding moisture to the atmosphere. This added moisture, in turn, causes more precipitation in the form of heavy rainfall and snowfall events.

This is part of a bigger trend of snowpack change that is putting the whole winter sports industry at risk. According to a study published in Geophysical Research Letters, the western United States has experienced an average drop of 41% in snowfall since the 1980s.

A similar pattern has been observed in the Alps, although the changes are less dramatic above 1,750m altitude, insulating some of the bigger resorts such as Zermatt and St Moritz.

Some snow sports are adapting by adding flexibility into the competition schedules, moving their event to colder locations, or adopting new snowmaking technologies. But these are band-aid solutions and the outlook for the future of winter sport remains bleak.

For those working in the industry and its associated tourism sector, the weather is a top concern and the loss of winter sports will be deeply felt.

Matt McGrath is the environment correspondent for BBC News

Research carried out at the University of Waterloo in Canada shows that nine of the 21 sites that have hosted previous Winter Olympics may not be reliably cold enough by the middle of this century to host them again.

In recent years, the Games in Vancouver in Canada and Sochi in Russia had to resort to artificial snow machines and other technology to keep things cool enough for competitors.

Rising temperatures around the world are making the air warmer, and the number of days with below average temperatures in winter has declined.

Snowlines are receding - you now have to go further up the mountain to find the snow than you did in the past.

The length of the skiing season has shortened - and is predicted to get even shorter. In the US, according to a study, virtually all skiing locations are expected to see a decline in season length of around 50% by the middle of this century. 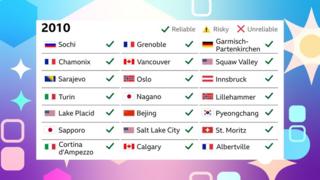 The 21 Winter Olympic hosts in 2010. Go right to see how they will be impacted by climate change

Right now, when there's not enough snow, resorts and Olympic venues have to turn to technology. Snow making equipment works by forcing water through tiny nozzle holes at high pressure - but it only makes snow if the air temperature is low enough. In a changing climate that's hard to guarantee.

Artificial snow is also expensive in terms of its environmental impact. The technology requires large amounts of water, plus energy in the form of electricity which can boost carbon emissions if it's not from renewable sources.

It's not just the snow that's being impacted by rising temperatures. It's also happening with ice, with backyard ice rinks in Canada starting to disappear as the world warms up.

A citizen science project found that by 2090, the number of skating days available will decline by over a third in cities like Toronto and Montreal.