Harry Kane is set to leave Tottenham and join Manchester City in a £160m deal - a Premier League record - which would earn the 27-year-old England striker £400,000 a week. (Sun)

Spurs are interested in Atalanta defender Cristian Romero and have reportedly bid £34m plus £8m in add-ons for the 23-year-old Argentine player. (Mail)

Atalanta are interested in signing Spurs' Colombia defender Davinson Sanchez, 25, as part of a deal for Romero. (Gianluigi Longari for Sportitalia)

France striker Kylian Mbappe, 22, is set to reject Paris St-Germain's latest contract offer and has his heart set on a move to Real Madrid, despite the French club's pursuit of 28-year-old Manchester United midfielder and international team-mate Paul Pogba. (Marca - in Spanish)

Pogba is expected to leave Manchester United this summer after rejecting a £350,000-a-week deal with the Premier League club who are not prepared to let him run down his contract and leave for free in 2022. (Mirror)

Manchester United are also struggling to reach an agreement with Real Madrid to sign France centre-back Raphael Varane, 28. The La Liga club are demanding £50m for the defender with United only willing to pay £40m. (Mirror)

Newcastle are confident of securing Southampton and Gabon midfielder Mario Lemina, 27, after holding talks with a number of midfield targets who are out of the club's price range. (Northern Echo)

'A physical and psychological nightmare'

Players are expected to return for pre-season in good condition these days, but that was not always the case...

Eden Hazard, 30, has made it clear that a return to Chelsea is out of the question after Spanish media reported the Belgium midfielder had been offered to the Blues as Real Madrid look to offload him. (Mirror)

Chelsea have opened talks with 21-year-old English right-back Dujon Sterling over a new contract. Chelsea's development squad coaches are understood to be impressed with Sterling's recovery and return to full fitness following a career-threatening injury. (Football.London)

Chelsea are also interested in Argentine goalkeeper Sergio Romero, 34, who is a free agent after his Manchester United contract expired, as the Blues continue their search for a third-choice keeper to provide cover for Edouard Mendy and Kepa Arrizabalaga. (Telegraph - subscription required)

Arsenal midfielder Granit Xhaka is close to completing a move to Roma, with the Serie A club keen for the Switzerland captain, 28, to join in time for their pre-season tour of Portugal next week. (Mail)

Aston Villa could make an offer for River Plate's 21-year-old Argentina forward Julian Alvarez over the next week. (TNT Sports - in Spanish)

Tottenham and United States defender Cameron Carter-Vickers, 23, is the subject of interest from Newcastle, who are keen to land a centre-back after Brentford won the race to sign Celtic's Norway international defender Kristoffer Ajer, 23. (90Min)

Liverpool are leading the race to sign Newcastle prospect Bobby Clark. The 16-year-old midfielder is the son of former Newcastle and Sunderland midfielder Lee. (Mail) 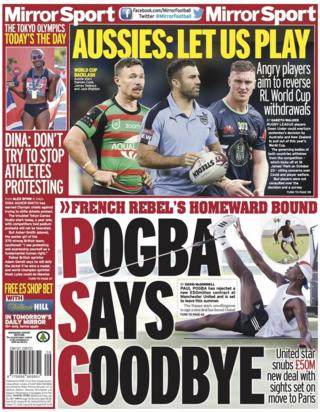 The back page of The Daily Mirror