Roma are closing in on a £34m deal for England striker Tammy Abraham, 23, as Chelsea look to offload the out-of-favour striker on loan with an option to buy. (Mail)

Abraham is also being eyed by Arsenal and Atalanta. (Goal)

Having had the first part of his Chelsea medical, Inter Milan's Belgium striker Romelu Lukaku, 28, could play in their Premier League opener against Crystal Palace on Saturday. (Daily Star)

Predict the Premier League table for the new season...

Lyon have made an offer for Liverpool and Switzerland forward Xherdan Shaqiri, 29. (L'Equipe - via Get French Football News)

Manchester United are set to confirm the signing of Real Madrid defender Raphael Varane, 28, on Wednesday - in time for the Frenchman to play in Saturday's Premier League game against Leeds. (Daily Star)

Liverpool are eyeing a move for Rennes and Belgium winger Jeremy Doku, 19. (Voetbal 24 - in Dutch)

Bayern Munich are considering re-signing Franck Ribery. The 38-year-old French winger has been training with the club since leaving Fiorentina. (Gazzetta dello Sport - in Italian)

Tottenham and France midfielder Tanguy Ndombele, 24, is considering his future at Spurs. (Athletic) 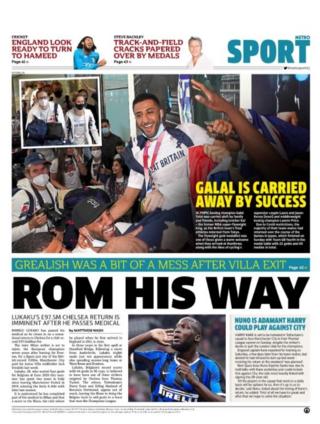