Liverpool are continuing to talk to Mohamed Salah's representatives over a new deal for the 29-year-old Egypt forward. (Liverpool Echo)

Tottenham are prepared to use wantaway France midfielder Tanguy Ndombele, 24, as a makeweight in a swap deal for AC Milan's Ivory Coast midfielder Franck Kessie, 24. (Calciomercato - in Italian)

Everton's Colombia midfielder James Rodriguez has been linked with a move to Istanbul Basaksehir, with the Turkish club keen to sign the 30-year-old before their transfer window closes on Wednesday. (Footmercato - in French)

Sevilla boss Julen Lopetegui says the La Liga club did not deliberately block French defender Jules Kounde, 22, from moving to Chelsea this summer, but decided it was better for him to stay after evaluating the offers made. (Diario de Sevilla - in Spanish)

Arsenal's Egyptian midfielder Mohamed Elneny continues to be linked with a move to Besiktas, but the 29-year-old's wage demands are said to have seen a deal collapse. (Mirror)

Ajax director of football Marc Overmars has said Cameroon goalkeeper Andre Onana, who is wanted by Arsenal, could leave on a free transfer next summer. (Team Talk)

Italian champions Inter Milan could also make a move for the 25-year-old as they search for a successor to 37-year-old Slovenia keeper Samir Handanovic. (Calciomercato - in Italian)

Paris St-Germain are hopeful France striker Kylian Mbappe will commit to a new contract despite the 22-year-old's desire to join Real Madrid on a free transfer next summer. (Athletic - subscription required)

Huddersfield Town's 22-year-old English midfielder Lewis O'Brien, who was wanted by Leeds United in the summer, is in discussions with the Terriers about a new contract. (Huddersfield Examiner)

Arsenal face a potentially significant loss after failing to sell 22-year-old striker Eddie Nketiah in the summer, with the former England Under-21 international stalling on a contract offer from the Gunners and able to commit to a free transfer to a foreign club in January. (Sun) 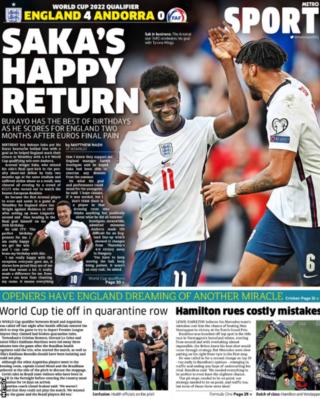