A joint investigation by BBC Sport Africa and Norway's Josimar magazine can reveal some of the background which led to one of world football's most senior figures being questioned by French authorities. He was interviewed, but not detained nor charged, in Paris last week.

At its heart lies a little-known company that Confederation of African Football (Caf) President Ahmad introduced to his organisation. France-based Tactical Steel has become a key supplier of equipment to Caf, including for this month's Africa Cup of Nations, despite not appearing to offer football equipment on its website.

Ever since documents leaked earlier this year highlighted a deal made in 2017 - the year Ahmad took office - between Caf and French company Tactical Steel, the Caf president's role has been under scrutiny.

Caf says it wanted to use a different sports brand to Puma but when the desired equipment - football and kits - could not apparently be obtained in time from a local manufacturer, Tactical Steel was appointed to provide them instead.

The switch to a new and unfamiliar supplier attracted attention.

Caf insiders say it is unusual for the African football body to buy sports equipment through a third party, rather than deal directly with major sports manufacturers as has happened regularly in the past.

Media reports suggest the orders - for the African Nations Championship (Chan) in Morocco in January 2018 - were identical but BBC Sport Africa and its Norwegian collaborator Josimar have been told this was not the case. 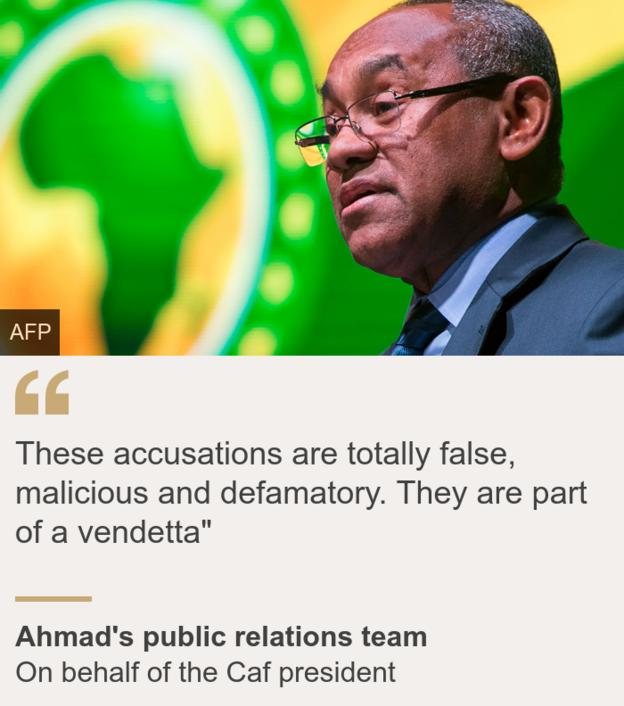 When asked by BBC Sport Africa if the Fifa vice-president, 59, had cancelled the Puma deal and personally approved one with Tactical Steel instead, a statement from Ahmad's public relations company said: "These accusations are totally false, malicious and defamatory.

"They are part of a vendetta being instigated by a former senior Caf employee against Caf and its president."

Ahmad's spokesperson said that it was the Caf administration, not Ahmad as president, which retained and negotiated the equipment prices with Tactical Steel.

They also said the Tactical Steel deal was spread across several years and "not just for Chan 2018".

A member of Caf's Executive Committee claimed that proper procedure has not been followed.

"Other than that, there is nothing to show that there [is] any presentation in terms of recommendation from the finance committee to the Executive Committee regarding Tactical Steel," the Liberian told BBC Sport Africa.

Who are Tactical Steel?

Based in La Seyne-sur-Mer, near Toulon, in the south of France, Tactical Steel was registered with French authorities in 2016 and specialises in making gym equipment.

No mention of its Caf partnership is made on the Tactical Steel website whose online shop does not appear to offer football sportswear nor football equipment.

But when Ahmad was mandated to arrange Chan equipment in November 2017, seven months after taking office, the company became a key supplier for Fifa's second-largest confederation.

Ahmad's attaché and right-hand man Loic Gerand, who was elected a member of Madagascar's parliament in 2014, is an old friend of Romuald Seiller, the Frenchman who owns Tactical Steel (along with his wife Sabine).

The BBC and Josimar have been told that both men served for five years together in the French army's 21st Marine Infantry Regiment.

Despite Gerand's and Seillier's long-standing relationship, Ahmad was unequivocal when telling the BBC that there was "quite clearly no conflict of interest" for his organisation.

There is no suggestion that Ahmad has personally profited from the arrangement, nor Tactical Steel owner Seillier nor Ahmad attaché Gerand.

The BBC and Josimar requested comment in late May from both Seillier and Gerand, but have yet to hear back.

Why are French authorities involved?

The BBC and Josimar have seen emails which appear to indicate that an affiliate company of Tactical Steel, set up in March 2018, was also involved in supplying Caf and that some payments from Caf were sent to a bank account in Dubai used by the affiliate and subsequently reimbursed to its regular bank in France.

As Ahmad attended the Fifa congress last week in France, where both Tactical Steel and the affiliated company are based, local authorities acted and took the president in for questioning.

Prosecutor Xavier Tarabeux, from the French city of Marseille, described the interview as "part of a probe into corruption, breach of trust and forgery".

"President [Ahmad], questioned in Paris on June 6th by the Central Office for the Fight against Corruption and Financial and Fiscal Offences (OCLCIFF), was released from police custody without charges," Mr Tarabeux announced on Friday.

Ahmad is now believed to be back home in Madasgascar, where the former senator and fisheries minister previously ran the local FA.

What are the questions over Ahmad's involvement?

In response to questions from the BBC, Ahmad's PR team wrote that the president, who campaigned on a platform of financial transparency, brought in Tactical Steel owing to an apparent absence of an alternative.

"The Caf President, who was facing a very difficult situation given it was just week's (sic) away from the first major tournament since being appointed President on 16 March 2017, decided to urgently retain the services of Tactical Steel, a French company specialising in the resale of sports equipment and materials," read the statement dated 3 June.

"The Caf President only introduced the company Tactical Steel because of the apparent absence of any other alternative," added the statement, citing Toulon's proximity to Morocco "to ensure swift ... transport of the equipment", "the short notice period" and "end-of-year holiday constraints".

A Caf email seen by the BBC and Josimar indicates that Puma had earlier been considered to be the only sportswear company the confederation had contacted who could fulfil the order.

Nonetheless, this deal was cancelled as Caf decided to use a different sportswear supplier.

Internal Caf emails from the time read as follows:

Ahmad has blamed former general secretary Fahmy for the failure to arrange Chan equipment on time (despite the Egyptian taking up his role in November 2017) and has dismissed all the allegations against him as "false".

Fahmy declined to comment when approached by the BBC.

Ahmad's PR team also told us that the deal signed in 2017 "covers multiple tournaments such as [the] Africa Cup of Nations", which starts on 21 June in Egypt.

In early 2018, shortly after the Chan, documents seen by the BBC and Josimar indicate that Caf also turned to Tactical Steel for an order of 60,000 hand-stitched footballs with Caf logos to be distributed to the confederation's 54 members.

What next for Ahmad?

BBC and Josimar believe the Tactical Steel link has been brought to the attention of Fifa's Ethics Committee's Investigative Chamber, which is understood to have opened an investigation into the governance of African football.

"Fifa is asking the French authorities for any information that might be relevant to investigations taking place within its Ethics Committee," read a statement by football's world governing body.

Later this month, the Malagasy will oversee his first Nations Cup - Caf's flagship event - as president of an organisation now under intense scrutiny.