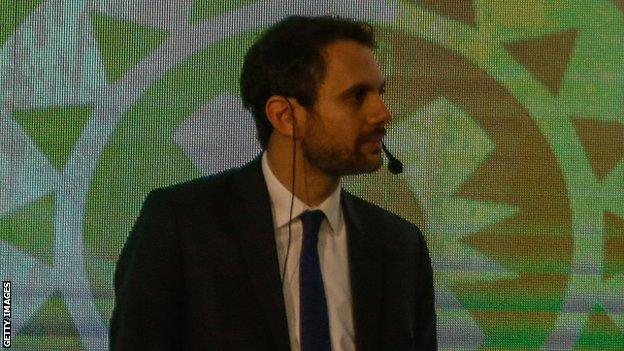 Former Confederation of African Football (Caf) General Secretary Amr Fahmy has died at the age of 37 after a two-year battle with cancer.

The Egyptian served as General Secretary between November 2017 and April 2019, when he was removed from his position without explanation.

Caf released a statement calling his death shocking and saying they "extend (their) deepest condolences to his family especially his parents, his spouse and daughter."

In December, he had announced that he would be running to be the organisation's next president in elections set for 2021.

He told BBC Sport that he wanted to lead African football's governing body while focussing on being "pro-Africa, pro-football and anti-corruption."

Shortly before he was ousted from his role with Caf, he had surgery for a brain tumour.

He spent his time after his dismissal between Cairo and Paris, where he had been receiving further treatment.

He leaves behind a wife and three-month-old daughter.

Fahmy's grandfather was a founder member of Caf - and both his grandfather and father served as general secretaries, helping to run the organisation for some nearly five decades.

Fahmy himself lasted considerably less - not even a year-and-a-half - before he was dismissed from his role in unclear circumstances.

What is known is that shortly before, Fahmy had officially complained to Fifa about corruption within the leadership of Caf - with football's world governing body since opening an investigation. Caf has denied any wrongdoing.

Just two months ago, Fahmy had announced a bid to become Caf president - with elections next year.

However, before he could take the family business - effectively - one step further, he lost his battle to cancer.

Fahmy was not just an administrator but a huge football fan - having been a founder member himself, of what is today the largest fan group of Egypt's record-breaking football giants Al Ahly.