Former international Lamiaa Boumehdi has welcomed the plans set formally out by the Morocco Football Federation (FRMF) aimed at developing the women's game in the country.

The FRMF signed an agreement of objectives with the National Women's Football League (LNFF), and the National Technical Directorate (DTN) last weekend.

Boumedhi made history last year when she became the first female coach of a national women's team when she was put in charge of under-17 and under-20 squads.

She then created even more history with the under-20's as they won the bronze at the 2019 African Games with were also crowned champions of North Africa in the same year.

"I am glad to be part of this big project to promote women's football in Morocco," she told BBC Sport Africa.

"It is a historical day to see all the actors of football in Morocco together launching a big project to develop women's football financially and sportively."

"Creating a football championship for under-17's and under-15's while increasing the number of players and providing them with professional contracts that ensure their financial stability is a dream that has come true."

"From the moment the national technical director Osian Roberts arrived our team have been committed and focused on ensuring we manage both the women's and men's game equally and professionally," she told BBC Sport Africa.

Roberts, who was a former assistant coach with the Welsh national team under three managers including Ryan Giggs, has been the FRMF's technical director since September and has been overhauling the federation's development strategies. 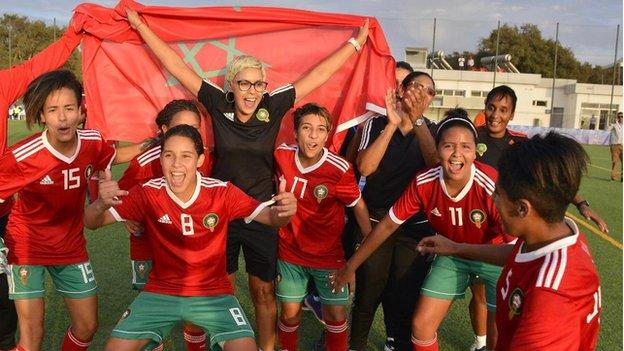 "The conventions signed on Thursday iare a great step towards that vision, with a shared project across all levels of developing the game. It is a special day for Morocco."

"Our objective is to develop and broaden the basis for women to play football in all regions of the Kingdom," said the FRMF president Fawzi Lakjaa as he unveiled the plans.

"This is an important step to allow Moroccan women to play this popular sport in good conditions and to give them the opportunity to show their skills in this sport as they have succeeded in doing in other disciplines.

The top-flight teams in the new women's league will be entitled to monthly funding from the FRMF of up to $130,000 while for second-tier sides it will be $86,000 to help pay the salaries of players and technical staff.

The regional leagues will get just over $10,000 for the development of women's football as long as they respect the terms of the contract.

The agreement also aims to support the management of clubs on an administrative and financial level by the National Technical Directorate and the Financial Department of the FRMF.

It is this wide-ranging approach that is particularly appealing to Lindsey.

"What is extraordinary and special, is that we have taken a holistic approach to these plans," Lindsey pointed out.

"We are focused on raising the level at the top of the game, while also equally investing in the grassroots and creating a pathway.

"We have spoken in depth about the importance of the pathway for players, coaches, staff, referees, and leaders in the game.

"When there is a career and livelihood in female football, more commitment can be made by former players, coaches, and referees who genuinely care about its growth and development."