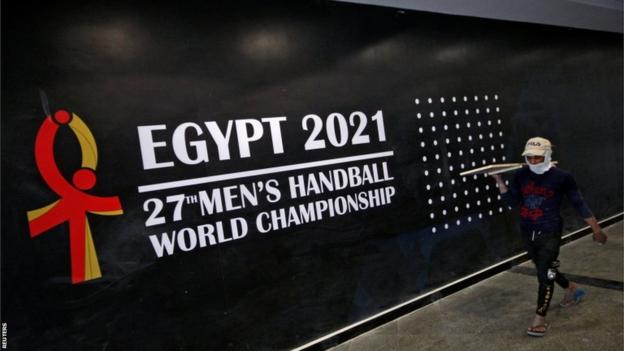 Cape Verde face a daunting task in their first ever match at the Men's World Handball Championship as they face Germany, who finished fourth two years ago.

The tiny island nation are one of seven African teams, alongside Morocco, Tunisia, Algeria, DR Congo, Angola and hosts Egypt at the tournament.

The Islanders' opening match will also pit Bergischer HC club-mates against each other, with Ivo Santos playing for Cape Verde and Lukas Stutzke for Germany.

Santos, who combines his playing career with a job at a manufacturing company, is part of the club's second-string team competing at regional level while Stutzke is a member of the first-team in the Bundesliga.

The gap in ability at club level looks set to be reflected at international level with the majority of the Blue Sharks squad playing in the less competitive Portuguese and Cape Verde championships.

The only Cape Verde player competing at the highest level is left-back Leandro Semedo with Ademar Leon, who were runners-up in the Spanish championship last season.

As with many nations though handball faces a battle with football for popularity, especially with the recent success of Cape Verde, who have twice qualified for the Africa Cup of Nations and were the number-one ranked team on the continent in March 2016.

"People think about football twice before we are even noticed," jokes Flavio Fortes, who currently plays as a right wing for HC Cournon in the third-tier in France.

Just 10 years ago Cape Verde were even struggling to play at continental level after financial issues forced them to miss the 2011 African Games in Mozambique despite having qualified at a tournament in Senegal.

"At the time all the national team players were playing in Cape Verde, whereas Senegal had plenty of players in the French leagues despite that we did well," recalls Fortes to BBC Sport Africa, who was 18 at the time.

"Later and despite our invitation the federation informed us we couldn’t participate for financial reasons and since then there has always been a lack of continuity."

Most of the players born in Cape Verde have had to leave the country in order to develop their careers, with former colonial rulers Portugal as the easiest place to move to.

“A few years ago, some of my teammates slept in the stands of a football stadium while playing away at youth level," Fortes continued,

“On my island, Sao Vicente, there are only two handball fields and probably no more than 150 people (of an estimated 80,000 people on the island) playing handball.

With Cape Verde's close historical links to Portugal it is no surprise that the latest squad is a mixture of those from the islands and those born in the European country with Cape Verdian ancestry.

And it was this mixture of players who last year finally got to play at the African Championships in Tunisia, replacing Senegal who chose not to send a team.

Things began ominously for the Blue Sharks as they lost their opening game to hosts Tunisia but they managed to turn things round with group-wins over Cameroon and Ivory Coast to help them finish fifth at the tournament which also earned them a ticket for the World Championships.

“At the beginning, some people were saying ‘look at this team of kids’ because our squad we looked like an under-18 side but we gave everything on the field," Fortes said.

"But then after we faced the hosts, Tunisia, the local journalists and the fans were surprised and began to looks at us differently.

"I remember before there weren't any journalists following us when we played, just the result in the press and that was all but today everybody is talking about handball in Cape Verde.

"I just hope they won’t forgot about us after the World Championship though.”

The team has also enjoyed a more professional approach to the preparations for the tournament including two training camps in Portugal.

“We managed to find the right path, and hopefully it will stay that way in the future to allow players to prepare in the best conditions possible so they can focus on handball and not on what we will eat or where we will sleep," Fortes continued.

“If we can progress game after game, it will be a good thing. We don’t want to stay at this level forever, even if we know we can’t get a win against Germany or Hungary”.

Their final opponents in the preliminary phase will be fellow newcomers Uruguay, who will provide Cape Verde's best chance of that vital win that would see them progress to the next round at their first ever World Championships.