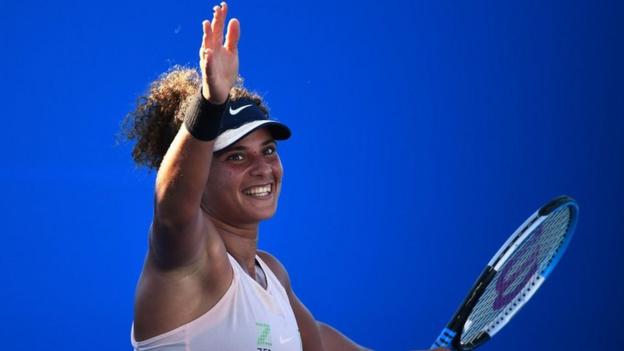 Mayar Sherif became the first Egyptian woman to win a main draw match at a Grand Slam when beating France's Chloe Paquet at the Australian Open on Tuesday.

The Egyptian was delighted to get a first Grand Slam win under her belt after losing to the Czech Republic's Karolína Pliskova in three sets at last year's French Open.

"It means a lot because finally this is a barrier that I had to pass, a mental barrier," said Sherif, who has been buoyed in the past by support from fellow Egyptian Mo Salah.

Sherif will next face Slovenia's Kaja Juvan, who progressed after the withdrawal of Great Britain's 13th seed Johanna Konta due to injury.

Both the Egyptian and Paquet had won through to the main tournament at the qualifying event, which was held in Dubai - due to the global Covid-19 pandemic - last month.

"Honestly, it was not very easy to start," said Sherif. "My second Grand Slam main draw, my first on a hard court, and the conditions are not easy.

"It was very, very tough to adapt to, especially to adapt my game. It took a while. Courts are faster, the heat, everything happens so fast, it's very tough to control the ball.

The last Egyptian to win a singles game at a Grand Slam was Ismail El Shafei, who reached the fourth round at the US Open in 1974.

"I am very, very happy with my accomplishment and I'm going for more," Sherif beamed afterwards.

"To put that on the match was not easy at all. There was a lot of nerves out there. Thank God I got to manage it and I finally played better at the important moments and I was able to break and win the match."

Sherif added that she thrives off the support she gets not only from back home but also the Egyptians in Melbourne.

"I feel very supported from the Egyptian people, from my partners, my sponsors," she said. "It's been great, and honestly it's just pushing me forward and forward because I feel that there are so many people behind me.

"Even being here in Melbourne the people were going crazy on the court today and that gave me a lot of support. I was in shock, to be honest. They were really, really happy, and that give me a lot of energy.

"I think it kind of affected her (Paquet) as well. She was very surprised playing at the very last court, in a very small court and then all these people suddenly appear for a 125-ranked player."

Next up for Harris is Australian wild card Alexei Popyrin.