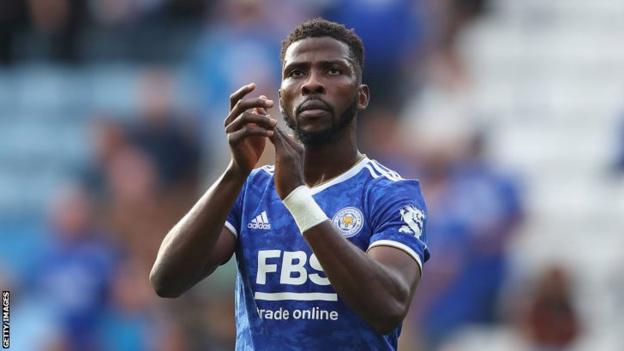 Nigeria international Kelechi Iheanacho insists he has no complaints about starting this season as a substitute for English Premier League club Leicester City.

His role on the bench comes despite scoring 19 goals last season to end Jamie Vardy's five-year streak as the club's top scorer and help them finish as surprise FA Cup winners.

Last month, he picked up from where he left off as he dispatched a late penalty as the Foxes stunned champions Manchester City to claim the Community Shield in the season's curtain-raiser.

Nonetheless, he is still waiting for his first league start of this season, having played a total of just 67 minutes so far when appearing as a substitute in Leicester's opening four games.

"Of course I had a pretty good season at the end of last season, but honestly I am not bothered [about] what's going on," Iheanacho told BBC Sport Africa.

"Now we have new players come in and we have a big squad. We need everybody to win trophies and games."

There is greater depth in attack this season, with the arrival of Zambia's Patson Daka joining him in pushing club legend Vardy for a place.

"It's going to be an important season and we have so many games and different competitions as well," added Iheanacho, 24.

"There are other players on the bench in the same circumstances. I know that everyone will be needed and be important to the squad.

"But whenever I get my chance to play or start, I will just do my job and help the team to succeed. We have a lot of games and everyone will be involved."

The year 2021 has been good so far for Iheanacho - having been named March's Premier League player of the month while also signing a new deal to keep him at Leicester until 2024.

The change in fortune comes two years after he endured a 14-month goal drought, during which time he was jeered by the club's own fans.

On the international front, Iheanacho showed his prowess when scoring both goals as Nigeria kicked off their 2022 World Cup Group C qualifying programme with a comfortable 2-0 win over Liberia in Lagos.

Now on 11 goals and five assists from 33 appearances for the three-time African champions, Iheanacho is widely regarded as the latest poster boy of European football in his country.

He admits that he is slowly beginning to get used to the idea that he is a role model for young kids across the West African nation.

"I honestly focus on my football but I am happy if the kids are inspired by what I do," he said.

"At the end of the day, if I can inspire other young kids to dream of playing football in the Premier League, then that's amazing. I will be happy to do more and continue to do well and inspire young African kids."