Hundreds of Burundians turned up at Bujumbura airport on Wednesday to welcome home Francine Niyonsaba after her recent successes overseas.

The Burundian athlete won the 5,000 metres Diamond League title in Zurich on 8 September before setting a new 2,000m world record six days later at a meeting in Croatia.

Earlier this year, Niyonsaba, a world and Olympic 800m silver medallist, switched away from her preferred distance after being banned from competing between 400m and 1500m because of naturally high levels of testosterone.

"I did the extraordinary, and I now feel like an extraordinary person in the world," the 28-year-old told reporters after landing.

"It is the first time that this cup (Diamond League trophy) has come to Burundi and now a Burundian woman is the fastest in the world over 2,000m - it is a blessing for my family and my country."

Her success came after a disappointing Olympics where she was fifth in the 10,000m and disqualified from the heats of the 5,000m for stepping off the track.

The crowds of people lined the streets despite recent attacks, which have been claimed by rebels, on the airport in the Burundian capital and deadly grenade attacks in the city on Monday.

"I am very happy - it is a blessing to be welcomed by different people," she said. "It is a joy that I can't explain also because when I won, I saw all Burundians in the country and abroad celebrating my victory.

"That gives me power and happiness to feel that I managed the extraordinary. I am grateful to all who supported me, the coaches in Burundi and in Kenya where I train. They all played a role in writing this history."

She promised to work harder to bring home a title from next year's World Athletics Championship in the United States "to make Burundians happy again."

Under the latest World Athletics regulations, Niyonsaba is classified as having 'Differences of Sexual Development' - or 'DSD' - and has been forced to move away from the 800m after refusing to take testosterone-reducing drugs.

Her 2,000m world record of five minutes 21.56 seconds was two seconds faster than the record set by Ethiopia's Genzebe Dibaba indoors in 2017, while also breaking the outdoor record set by Ireland's Sonia O'Sullivan in 1994. 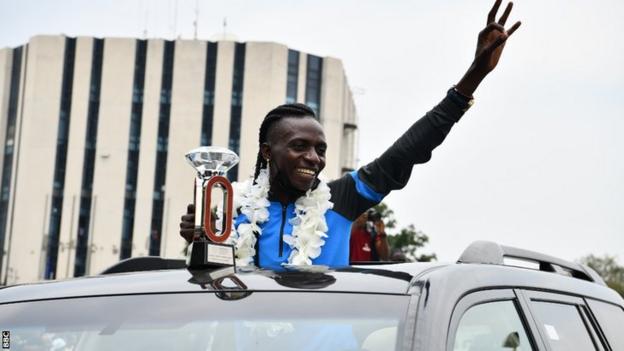