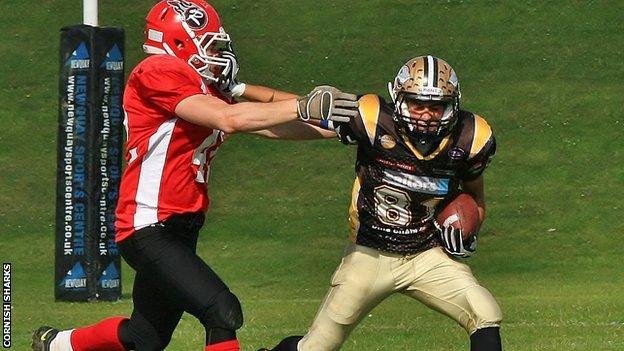 The Sharks have signed a two-year deal with the South West Peninsula League club after seven seasons at Newquay Sports Centre.

"It was a surprise move, but they've got everything that we need," Smallworth told BBC Radio Cornwall.

"We've got aspirations to play in our Premiership within the next five years.

He continued: "They've got all the facilities that we need and we'll get revenue from people coming through the gates.

"That's one of the major factors for teams to improve and move forward is that you need revenue streams and we get that via the sponsorship around the grounds and gate receipts.

"We're getting good crowds, but we can't charge at the sports centre so we were getting 300-400 people at a game and it was lost revenue."

The Sharks, who play in Division Two South West of the British American Football League, will also have the use of Newquay's planned new training ground.

The Sharks play their first match at Mount Wise on Saturday, 5 May.