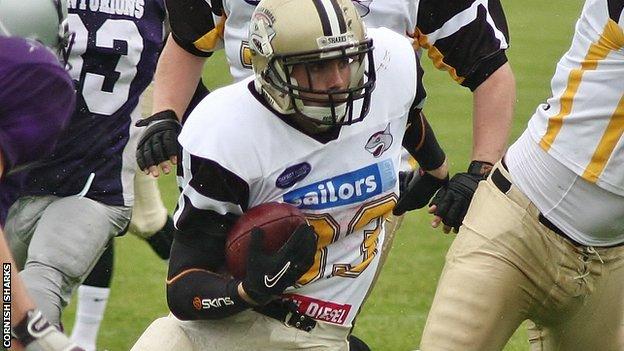 Cornish Sharks got a second successive win as they beat Bristol Apache 40-0 at Mount Wise in Division Two West of the National League.

Lee Ambridge scored a hat-trick of touchdowns while Dave Kreihn, Matt South and Rob McIntyre got one each.

"It was a good day at the office," head coach Brian Smallworth told BBC Radio Cornwall after the win.

"The defence played particularly well and offensively we controlled the football," he added.

The Sharks moved above Bournemouth Bobcats with the win to go second in the division and travel to play undefeated league leaders Oxford Saints next week.

"We put a lot of pressure on them, forced the errors and I'm very proud of the guys out there.

"The tempo didn't drop throughout, which helped with the offense being able to move the ball throughout."