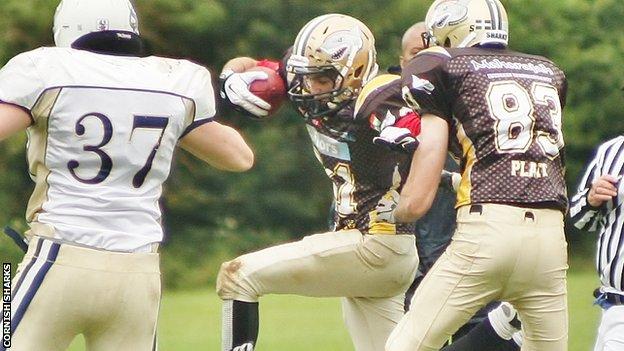 Cornish Sharks' play-off destiny is back in their own hands after a 16-0 win over league leaders Oxford Saints.

Running-back Lee Ambridge opened the scoring at the end of the first quarter and Dave Kriehn added a field goal in the second period.

Ambridge had a third-quarter touchdown disallowed before quarter-back Richard Atkinson sneaked in from a yard out to seal the game in the fourth period.

The win keeps the Sharks second in the British American Football National League's Division Two West and the club know a win over Bournemouth Bobcats in their final match will secure them a play-off place.

"We still need to beat Bournemouth at home which will be the game of the season," Smallworth said.

"Oxford had a great crowd and we silenced them from the work go and played really well.

"We'll play well against the Bobcats and I expect us to beat them, we know what the Bobcats have got and they're nothing special."