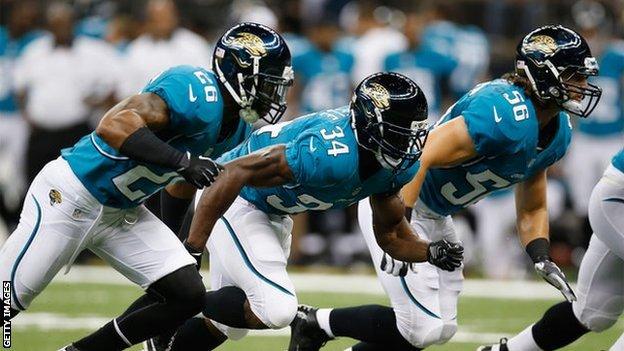 Jacksonville Jaguars have reached a deal to play annual regular-season games at London's Wembley Stadium from 2013 to 2016.

All 32 NFL clubs were able to bid for the opportunity, with the Florida-based team's proposal being selected.

The opposing team for the 2013 match will be announced in the months ahead.

Owner Shad Khan said: "Playing a home game in London over four seasons is consistent with our vision to introduce and grow the Jaguars brand globally."

Regular-season NFL games have been played at Wembley since 2007.

The NFL said it was also working to add a second UK-based game to its 2013 calendar.

Khan added: "We're appreciative of the support from the Jacksonville business community to make this a reality and winning proposition for everyone.

"This is a priceless opportunity to share the business, tourism and lifestyle story of Jacksonville with international audiences."

NFL commissioner Roger Goodell said: "Our goal is to continue to grow the game, and this commitment by the Jacksonville Jaguars represents a major step forward in our international efforts.

"We have had a tremendously positive reaction to our sport in the UK and we're excited that the Jaguars are seizing this opportunity."

As part of the 2012 NFL schedule, the St Louis Rams host the New England Patriots at Wembley Stadium on 28 October.

The Rams had also been due to play in London in 2013 and 2014, but they recently pulled out of that deal, paving the way for the Jaguars to take over.