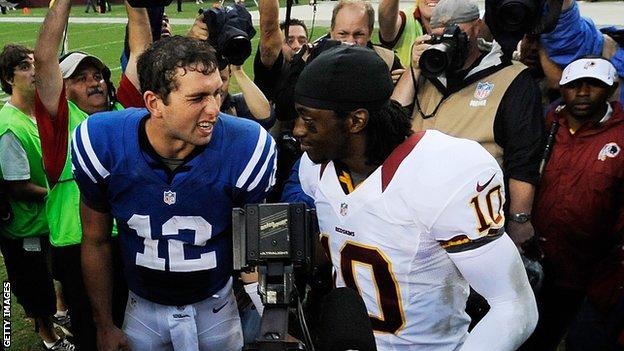 The NFL season kicks off on Wednesday night in the United States (early Thursday morning in the UK) with fans of all 32 clubs hoping that this will be their year.

BBC Sport previews the season with some of the UK's best-known NFL experts and fans, including England cricketer Jonathan Trott.

Who is going to win the Super Bowl?

Darren Fletcher, BBC 5 live's NFL commentator (DF): I'm tipping the San Francisco 49ers because, as the old saying goes, defence wins championships. The 49ers have the best one in the NFL - they have retained last year's unit and I expect them to be even better this time around. Offensively, quarterback Alex Smith has added weapons in wide receivers Mario Manningham and Randy Moss.

Kevin Cadle, Sky Sports presenter (KC): I like the Philadelphia Eagles. It will be tough navigating the NFC East and keeping Michael Vick upright, but I like what the Eagles bring to the party on both sides of the ball.

Jonathan Trott, Warwickshire and England cricketer (JT): It's so tough to pick one team in a competitive league like the NFL. I think my team, the San Francisco 49ers, have a good shot although they won't be a surprise package this year and people will be gunning for them. But they look a more rounded team and they have confidence and continuity in the coaching staff. Quarterback Alex Smith is starting to get the fans believing in him.

Which team is going to surprise everybody?

DF: Carolina Panthers. I think the fact that quarterback Cam Newton has a year of experience under his belt make the Panthers genuine contenders to win their division this year. His relationship with Steve Smith will continue to produce and Brandon LeFell will be a nice complement at receiver. Head coach Ron Rivera is a defensive expert and he will make that unit much stronger in his second season in charge.

KC: Each year at least five different teams make the play-offs from the previous season. The Seattle Seahawks have a top-10 defence and a strong running game. They are led by a rookie QB in Russell Wilson - if he can just manage the game then the Seahawks could be play-off bound.

JT: I think it could be the Washington Redskins. As well as having drafted Robert Griffin III (aka RG3) at quarterback, they have outstanding wide receivers in Josh Morgan, Pierre Garcon and Santana Moss

Who is going to be the worst team this year?

DF: The Jacksonville Jaguars look like a team in the doldrums, lacking enough playmakers on both sides of the ball. Quarterback Blaine Gabbart disappointed as a rookie and must improve, while the likely absence of star running back Maurice Jones-Drew - who is holding out for an improved contract offer - will have a big impact offensively. They are in major rebuilding mode and this looks like a difficult year.

KC: Miami and/or Jacksonville. Things look dreary for teams in Florida. The Dolphins just don't have talent and the Jags better get Maurice Jones-Drew back with the team, all they have to do is pay him some more money!

JT: I don't know about being the worst team, but it could be another season of struggle for teams like the St Louis Rams and Kansas City Chiefs, who just don't seem to have found that winning formula.

Which players are catching your eye?

DF: Andrew Luck and Cam Newton. The NFL is a quarterback-driven league and in Luck and Newton we have two who could light up the scoreboard for years to come. Luck is rated as the best QB prospect to come out of college since John Elway in the early 80s, while Newton may revolutionise the position with his size allied to his ability to run and pass for touchdowns. Both will bring lots of excitement this season and could bring championships to their respective teams in coming years.

KC: Rookie cornerback Morris Claiborne will be a big boost for the Dallas Cowboys if he holds up. Veterans to watch include Houston running back Arian Foster and quarterback Peyton Manning, now at the Denver Broncos.

JT: As well as RG3 at Washington, I'm excited about watching Andrew Luck at the Colts. I saw a lot of him at Stanford University and he just looked like an NFL quarterback even in the college game. I expect him to have a big impact.

The opening game of the 2012 NFL season - Dallas Cowboys at New York Giants - will be broadcast live on BBC 5 live sports extra from 01:15 BST on Thursday 6 September