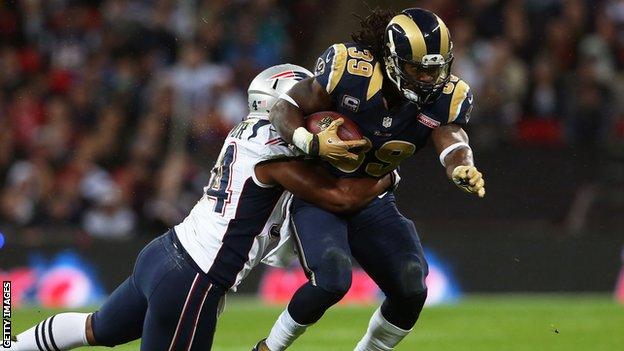 After a bright start, in which they scored on their opening possession, the Rams were repeatedly torn apart by New England's top-ranked offence.

The Patriots, beaten in February's Super Bowl, killed the game off with another touchdown just after the break.

The Patriots, nominally the "away team" but clearly well-backed by the 84,005 sell-out crowd, were stunned after only three minutes when Rams quarterback Sam Bradford caught them unawares with a 50-yard pass down the middle.

Rookie wide receiver Chris Givens surged through the New England defence and took the catch as he dived into the endzone.

New England, who boasted the NFL's best offence coming into the game, signalled their intent on their own opening drive.

Expertly mixing running and passing plays, Brady marched his team down the field before finding an unmarked Brandon Lloyd in the right-hand corner of the endzone from 19 yards.

That was the start of a masterful display from the 35-year-old quarterback, who has won three Super Bowls during his career.

An 83-yard drive, featuring a pair of 25-yard catches by star tight end Rob Gronkowski, took the Patriots to virtually the goal-line.

The Rams, whose defence has improved considerably since last season, thought they had done enough to restrict the Pats to a field-goal attempt, but in typically bullish fashion coach Bill Belichick ordered his team to go for broke on fourth down.

Brady continued to slice through the Rams' hapless defence, before finding Gronkowski in the front of the endzone from seven yards.

The Patriot tipped his hat to the London crowd with his celebration, marching like a toy soldier before being mobbed by his team-mates.

With his next possession Bradford, playing in his third season as a professional after being earmarked as the best college player by the Rams in 2010, could only get to the 35-yard line on third down before rookie kicker Greg Zuerlein came on for a 52-yard field goal attempt.

But John Hekker, instead of putting the ball down for Zuerlein to kick, picked it up and was still thinking about throwing a pass when he was gleefully swamped by the Patriots' alert defence.

New England, not content with a 14-point lead, twisted the knife still further when Stevan Ridley piled into the endzone from a yard out to make it 28-7 at the break.

Having conceded touchdowns on each of New England's four first-half possessions, the Rams' coaching staff were glad for the break and a chance to regroup.

However, the third quarter began as the second had ended. Brady led a 71-yard drive before Lloyd caught his second touchdown pass from nine yards.

Ridley then got the running game going before the Pats finally ran out of steam. Stephen Gostkowski tacked on three more points with a 26-yard field goal to make the score 38-7.

Still the nightmare was not over for St Louis, who have now lost five of their eight games, as Brady and Gronkowski were again the ones to do the damage, this time courtesy of a 14-yard touchdown strike.

The Patriots, who were narrowly beaten in February's Super Bowl by the New York Giants, have now won five of their eight games and top the AFC East division.

Far tougher challenges await this season, but after completing their second comprehensive Wembley victory in three years, Belichick's men will return to New England very satisfied with their work in old England.