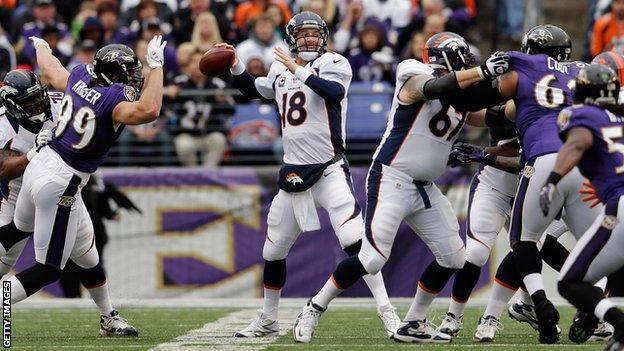 The Baltimore Ravens travel to the Denver Broncos on Saturday in arguably the pick of the divisional play-offs.

Legendary Ravens linebacker Ray Lewis will retire as soon as his side are eliminated, and he will be desperate to win another Super Bowl winners' ring.

In Sunday's AFC encounter, the Houston Texans go on the road to face the New England Patriots.

In the NFC, the San Francisco 49ers and Atlanta Falcons respectively host the Green Bay Packers and Seattle Seahawks.

Lewis, who has led the Ravens' fearsome defence for most of his 17 years in the NFL, will be up against another star veteran and guaranteed future Hall of Famer, Peyton Manning.

The Denver quarterback, 36, had been written off by many after missing all of his final season at the Indianapolis Colts through injury.

But Manning is in the form of his life, recording the highest quarterback rating of his career this season, and he and his team-mates have had a bye week to recover.

In beating the Colts last weekend, Houston may have exorcised the demons associated with their end of season collapse but they will still think they should be hosting the Patriots rather than travelling to Massachusetts.

They will need their star running back Arian Foster, who has 15 touchdowns this season, to be in sparkling form against a Patriots side far better known for their stars on offence - quarterback Tom Brady, wide receiver Wes Welker and tight end Rob Gronkowski to name just three - rather than defence.

The 49ers, who agonisingly lost to the New York Giants in last season's NFC Championship game, will certainly have a tough game against the Packers.

Much will depend on whether the Niners' defence can minimise the threat posed by Green Bay quarterback Aaron Rodgers. And if they can achieve that, can Rodgers' opposite number Colin Kaepernick deal with the unique pressure of play-off football?

The winners of that match-up will take on either this season's surprise package Seattle, or the top-seeded NFC side Atlanta.

The Seahawks' Russell Wilson has arguably outshone his more high profile fellow rookie quarterbacks Andrew Luck and Robert Griffin III, and was solid as they beat Washington in the wildcard round last weekend, but taking on the Falcons in their own backyard may be a step too far.