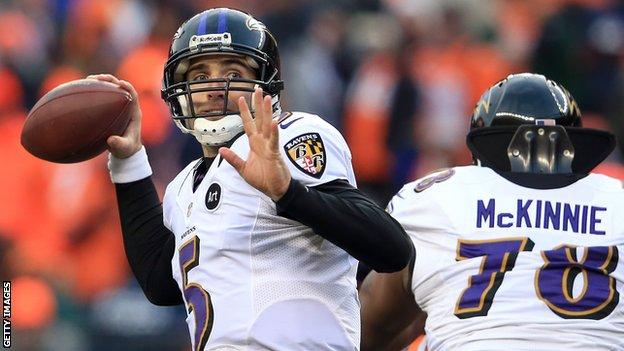 The Baltimore Ravens eventually overcame the Denver Broncos in double overtime at the end of one of the greatest play-off games in NFL history.

The Broncos looked set for victory when they were leading by seven points with 31 seconds remaining in regular time at Mile High Stadium.

Jones held on after the ball soared over Rahim Moore's attempt at an interception and the Baltimore receiver then scampered unopposed into the endzone.

It was just one of several sensational plays in the longest NFL game for 26 years.

Denver return specialist Trindon Holliday broke a pair of play-off records. First he returned a punt 90 yards for a touchdown and then he returned the second-half kick-off 104 yards for another touchdown.

The last-gasp touchdown set up a nervy overtime as both teams tried to inch their way into field-goal range but with neither side scoring, the game entered a second additional period.

Having overcome serious injury and his advancing years, his uncharacteristically sloppy pass was intercepted by Corey Graham.

Six plays later, it was all over and the Ravens' legendary defensive leader Ray Lewis - who has already announced his retirement at the end of the season - will travel with his team next Sunday to face an AFC Championship game against the winner of the clash between the New England Patriots and the Houston Texans.

The San Francisco 49ers booked their place in the NFC Championship match by completely outplaying the Green Bay Packers.

On his play-off debut, Kaepernick was sensational, passing for 263 yards and a pair of touchdowns, and running for a quarterback-record 181 yards and another two touchdowns.

His opposite number, Aaron Rodgers, lacked sparkle throughout, while the Packers' defence was truly woeful, giving up the most total yards (579), yards rushing (323) and second-most points in the play-offs in franchise history.

The Niners will be hoping that the Seahawks can upset the Falcons in their meeting on Sunday. If that happens, San Francisco will host Seattle next Sunday; if not, the 49ers must travel to Atlanta.