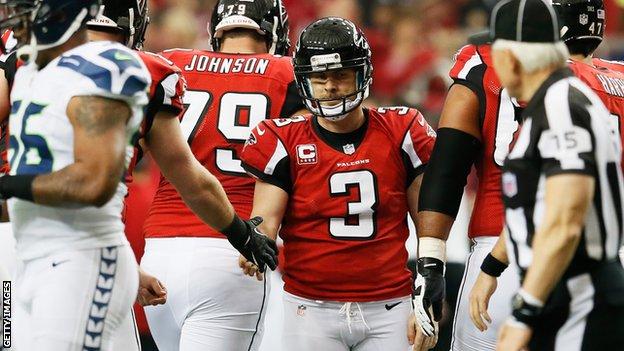 A last-gasp field-goal from Matt Bryant spared Atlanta's blushes as the Falcons survived a fourth-quarter comeback from the Seattle Seahawks to win 30-28.

The 37-year-old kicker struck from 49 yards with only 13 seconds remaining of a thrilling encounter to book Atlanta's place in the NFC Championship game.

The Falcons began brightly and raced into a 20-point half-time lead.

But the visitors, led by rookie quarterback Russell Wilson, fought back and led 28-27 before Bryant's winner.

It was tough on Seattle, and Wilson in particular, whose desperate Hail Mary pass into the endzone as time expired was intercepted by stand-in defender Julio Jones.

The Falcons got off to a tremendous start as, following a field-goal from Bryant, Tony Gonzalez's one-yard touchdown catch from Matt Ryan gave them a 10-point lead.

By the break, the gap had doubled as a result of another Bryant kick and Roddy White's 47-yard touchdown reception.

The Seahawks had the chance to get at least three points on the board at the end of the half, but some poor clock-management from Wilson prevented Ryan Longwell from getting on the field in time to attempt a field-goal.

But whatever Seattle coach Pete Carroll said at the interval clearly worked as his side really got their act together.

After Wilson found Golden Tate for a 29-yard strike, the Falcons restored their 20-point lead thanks to Jason Snelling's touchdown catch.

Rather than letting their heads drop, however, the Seahawks kept plugging away and were rewarded with a pair of touchdowns.

First Wilson scrambled in from a yard, then he found tight end Zach Miller from close range to make it 27-21.

The young quarterback then led a seven-play, 61-yard march down the field which culminated in Marshawn Lynch's two-yard touchdown run.

That should have been enough to book the Hawks a trip next Sunday to face the San Francisco 49ers, but Ryan responded under pressure to set up Bryant's winning kick.

The Falcons, owing to their superior regular season record, will instead welcome the 49ers - who brushed away the Green Bay Packers - to Georgia.

In Sunday's other game, the New England Patriots host the Houston Texans with the winner going on to host the Baltimore Ravens, who on Saturday beat Denver in an epic game.