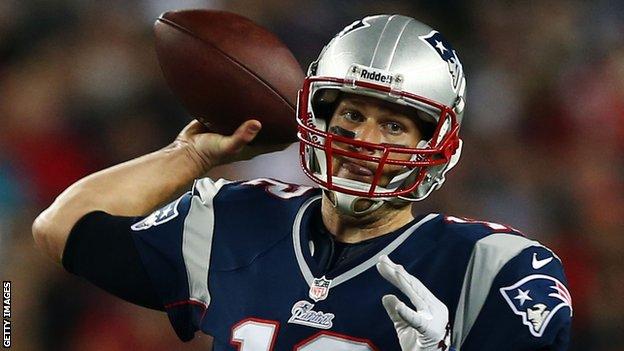 The New England Patriots booked their seventh appearance in the AFC Championship game in 12 years by beating the Houston Texans 41-28.

Veteran quarterback Tom Brady was in vintage form, making 25 of 40 passes for 344 yards and three touchdowns.

They will be at home again next Sunday, when the Baltimore Ravens will be trying to avenge their narrow defeat at this stage last year.

Atlanta Falcons will host the San Francisco 49ers in the NFC game.

Having led 17-13 at the break courtesy of two Shane Vereen touchdowns (the first a one-yard run, the second an eight-yard pass from Brady), the Patriots all but sealed the game with a blistering third-quarter performance.

Stevan Ridley rushed in from eight yards before Brandon Lloyd caught another Brady pass and scrambled into the endzone from five yards out.

Vereen completed a memorable night with his third touchdown, catching a perfectly flighted 33-yard ball from Brady to make it 38-13.

The Texans finally woke up and their quarterback Matt Schaub threw a couple of touchdown passes of his own, to DeVier Posey and Arian Foster.

A successful two-point conversion reduced their arrears to 38-28 with little more than five minutes remaining.

But the Patriots are nothing if not ruthlessly efficient at getting the job done, and successfully wound down the clock.

Baltimore will head to Massachusetts fearing nobody after eventually seeing off the Denver Broncos on Saturday in a four-hour epic - the longest NFL game for 26 years.

The home crowd in a freezing Denver - where the windchill was a staggering -18C (2F) - were first stunned when the Broncos conceded a 70-yard touchdown pass with 31 seconds of regular time remaining to force the game into extra time.

And then, amid unbearable tension in the second period of overtime, Ravens kicker Justin Tucker successfully made a 47-yard field-goal to complete a stunning 38-35 victory.

Earlier on Sunday, the NFC's top seed, Atlanta, survived a mighty scare at home to the Seattle Seahawks before running out 30-28 winners.

The visitors, who have the youngest roster in the NFL, appeared to be dead and buried at half-time, when they trailed 20-0, and again at the end of the third quarter when they were 27-7 down.

But some hugely impressive play by rookie quarterback Russell Wilson saw them take a 28-27 lead with less than a minute on the clock.

The Falcons were not done, however, and were left jubilant when Matt Bryant booted over a 49-yard field-goal with 13 seconds remaining.

If they are to make their first Super Bowl since 1999, Atlanta are going to have to play far better next Sunday against San Francisco, who completely outplayed the Green Bay Packers in their 45-31 victory on Saturday.

On his play-off debut, their quarterback Colin Kaepernick was sensational, passing for 263 yards and a pair of touchdowns, and running for a quarterback-record 181 yards and another two touchdowns.

His opposite number, Aaron Rodgers, lacked sparkle throughout, while the Packers' defence was truly woeful, giving up the most total yards (579), yards rushing (323) and second-most points in the play-offs in franchise history.