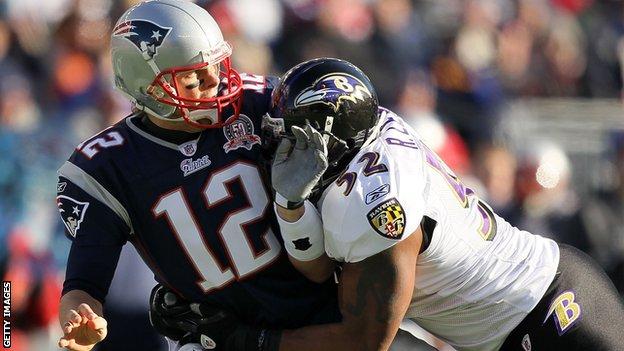 The New England Patriots will take on the Baltimore Ravens on Sunday in their seventh AFC Championship appearance in 12 years, and a rematch of last year's epic encounter at the same stage.

Whoever books their ticket to the Super Bowl in New Orleans on 3 February will meet the winner of the later NFC Championship clash between the Atlanta Falcons and the San Francisco 49ers.

The Ravens are likely to start as underdogs against the Patriots, while San Francisco's fearsome defence meets Atlanta's potent offence.

In a league that places a premium on the competitive balance between its 32 teams, the New England Patriots have been resisting the pull of parity for more than a decade now with their consistent excellence.

New England, who dismantled the Houston Texans before running out 41-28 winners last weekend, are purring on offence, with their iconic quarterback Tom Brady writing even more records in his already glittering career. Against the Texans, he recorded his 17th post-season win to beat his childhood hero, Joe Montana.

Now Brady wants to equal the legendary San Francisco quarterback's fourth Super Bowl win. First of all, though, he needs to negotiate a path through the Ravens' famed defence.

The weapons at Brady's disposal are impressive. While Stevan Ridley and Shane Vereen are decent ground options, the main New England threat comes through the air. Even without injured tight end Rob Gronkowski, Brady has the large target of Aaron Hernandez and out wide are the ever reliable hands of Wes Welker and deep threat Brandon Lloyd.

Then you can add the "been there, done that" attitude that flows within the franchise. The taciturn Belichick said of his equally battle-hardened team: "My players have worked hard all year. But we know Baltimore will be tough - we had a great game with them earlier this season down there and it will be a battle."

The Ravens' talismanic defensive leader, linebacker Ray Lewis, will be desperate to stop Brady's glittering offence. Known by his team-mates as The General, he will lurk in Brady's nightmares all this week.

The grizzled 37-year-old veteran of 17 punishing seasons has galvanised the Ravens in the play-offs after recently returning from injury. A torn triceps kept Lewis out of action since week six of the regular season and, in his absence, the Ravens stuttered towards the post-season, losing four of their last five games.

Lewis returned with his arm patched together with black protective padding from shoulder to elbow, which only adds to his air of menace. The Ravens duly swept to a 24-9 triumph versus the Indianapolis Colts and then an astonishing 38-35 win in double overtime at the Denver Broncos.

Lewis, who has already announced his retirement at the end of the season, remarked to the Baltimore Sun after the Broncos game that defying the odds has defined his time in the NFL: "That's the thing I'll probably miss more than anything about my career - it will be to listen to what people say you can't do and then go and do it."

The smart money is on a Patriots victory, with Brady and company booking their spot in New Orleans and sending Lewis growling off into the sunset. But the Ravens won the regular season meeting between the two sides, 31-30 in Week Three, and, as the Denver Broncos can testify, the Lewis-inspired Ravens never know when they are beaten and will fight to the very last.

It makes this Championship game a thrilling prospect in a post-season which has already been one of the finest of vintages.

The 49ers may have won five Super Bowls but the glory days of Montana, Steve Young, Ronnie Lott and Jerry Rice now seem a long time ago.

Can quarterback Colin Kaepernick continue to inspire the current generation, and ride a wave of momentum all the way to New Orleans?

And can their head coach Jim Harbaugh complete his half of a family double - his big brother John is his opposite number at the Ravens.

The success and popularity of the team in the 80's mean there is considerable support for the Niners worldwide, rather than just in the Bay area.

Last season, San Francisco hosted the NFC Championship game but were edged out by the eventual Super Bowl winners, the New York Giants.

This time around the fearsome Atlanta Falcons are the opposition in a match that promises much in a post-season that, so far, has delivered drama and thrills in equal measure.

Harbaugh made a controversial and key decision midway through this season when he replaced incumbent starter Alex Smith, ranked third in the league in passer rating, with the more dynamic Kaepernick.

Blessed with a strong arm, allied to the ability to scramble with the ball for big yards when needed, he has vindicated Harbaugh's decision.

There was no finer demonstration of Kaepernick's abilities than in last weekend's 45-31 defeat of the Green Bay Packers, when he galloped for 181 yards and two touchdowns - a play-off record for a quarterback - in addition to throwing two touchdown passes. It was truly a performance to silence any doubters.

"It feels good." Kaepernick admitted. "We're one step close to where we want to be. I feel like I had a lot to prove. A lot of people doubted my ability to lead this team."

The Falcons won't make that mistake. They destroyed another young quarterback's dream when they survived a fourth-quarter revival by Russell Wilson and the Seattle Seahawks last weekend.

Atlanta have never won the NFL's biggest prize but this season represents their best chance in years to finally reach the summit.

But head coach Mike Smith and defensive coordinator Mike Nolan, once the head coach of the 49ers, have to come up with a plan to contain Kaepernick and company.