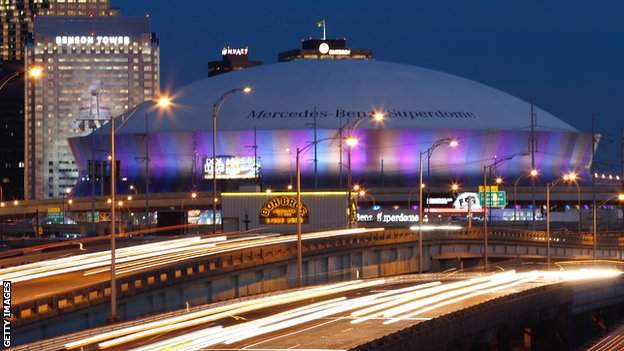 When Super Bowl XLVII kicks off in New Orleans on Sunday, it will be the culmination of the remarkable recovery of a resilient city.

The restoration of the Superdome following the devastation wrought by Hurricane Katrina eight years ago has been a source of fierce civic pride for New Orleans, as well as a lasting testament to the city's perseverance.

An enormous stadium in the heart of the city, it is the largest fixed dome structure in the world. But back in August 2005, it received international attention for very different reasons, as the "refuge of last resort" for those who were unable to flee the stricken city.

Doug Thornton, senior vice president of the Superdome's management company was in charge of the stadium during Katrina.

He told me that 30,000 people sheltered there, in increasingly squalid conditions, for five days.

"At the time, government officials thought it would be best to put people here in the stadium only because there was nowhere else in the city that could handle it. And I still believe to this day that the Superdome saved thousands of lives, including my own."

Mr Thornton said he was amazed by the transformation not only of the stadium, but of the Louisiana city famous for being the birthplace of jazz and its annual Mardi Gras festival.

"Never in my wildest dreams did I think we'd be at this point now, hosting the world's biggest sporting event in our city, which has been completely reinvented."

After the hurricane, which caused substantial damage to the Superdome's roof, doubts were expressed about whether it could be saved.

But after it was found to be structurally sound, repairs costing $336m (£212m) were carried out and, following the biggest stadium reconstruction in American history, the Superdome reopened within a year.

In 2009, New Orleans announced it wanted to host the Super Bowl.

Jay Cicero, president of the Greater New Orleans Sports Foundation, was a leading member of the bid team. He said one of the key reasons for wanting to bring the Super Bowl to the city was financial - the estimated economic benefits of hosting a Super Bowl were calculated at $434m (£274m).

In many ways, he said, persuading the NFL to bring the Super Bowl to New Orleans was a high profile way of saying the city was back, bigger and better, and ready to welcome the world more than ever before.

"You've got a $300m renovated Superdome. But you've got to take into account all the positive exposure that comes with hosting a Super Bowl and I think that means more to us than the economic impact.

"It's a pretty amazing story and we're just a microcosm of what everyone in the city has gone through and the resiliency of the people."

It has certainly been an amazing few years for The Big Easy, and Mr Thornton, with tears forming in his eyes, summed it up perfectly.

"There will be a point, probably around the time of the national anthem, when I will reflect on the road we have travelled. I will think about how proud I am of this city and the building."