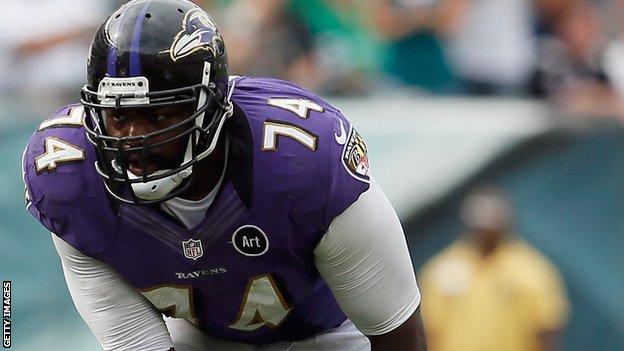 The name Michael Oher has already been up in lights after the 26-year-old was the subject of a £190m Hollywood film starring Sandra Bullock.

Now the Baltimore Ravens' tackle has the chance to make his name on the biggest stage in the sport, when he takes his place in Super Bowl XLVII against the San Fransisco 49ers on Sunday.

The Blind Side brought Bullock an Oscar for best actress in 2010 for her portrayal of Oher's adoptive mother, Leigh Anne Tuohy.

The film was based on a book by Michael Lewis, which detailed the life of Oher and his transformation from homeless teenager to earning a scholarship at the University of Mississippi and finally being drafted by the Ravens.

"The movie's great, very inspiring " Oher said at a news conference ahead of the Super Bowl.

While he enjoyed the film, Oher emphasises that it did not show the real him.

"The football part is the only part I have a problem with," he says. "Sports was all I had when I was growing up - it made me look like I just didn't know anything."

He lived with several foster families during his childhood before moving in with Leigh Anne and Sean Tuohy in 2004 and they eventually adopted him.

He attended school with their son and daughter and they hired a home tutor to improve his grades, giving him the chance to attend college and further his football career.

After graduating with a degree in criminal justice, Oher was drafted by the Ravens in 2009. Footage of this is shown during the closing credits of The Blind Side.

Despite Oher's impressive progress through the professional ranks, Leigh Anne still worries about him as only a mother can.

"Football is a brutal sport," she says. "I just watch Michael and when they go down you just say 'get up, get up, get up'.

"But you can't worry about him every moment of every day."

Oher's father, Sean Tuohy, who is portrayed by Tim McGraw in the film, says he just wants his son to make the most of the day on Sunday.

"I think the most important thing is to have fun," he says.

"Nobody gets to be that lucky. If you are, then have fun with it - and he will. He'll play hard, he takes it very seriously. He understands it and he'll have fun with it."

Oher's school and university coach, Hugh Freeze, is also looking forward to seeing his protege take on the 49ers.

He says: "He is not my son, but I feel like I would if I had a son playing in the ultimate game of football. I feel like a proud poppa."

The film shows Leigh Anne having a big impact on Oher's development in American football, yet Freeze believes he has such natural ability that he would have made it whatever.

"It's a rare combination to be that big and to be that agile, that makes for a very good football player," he explains.

"It was very obvious this kid was going to be a national recruit."

Now all eyes will be focussed on New Orleans and Super Bowl XLVII, where Oher will be trying to provide a blockbuster ending to an already incredible story.