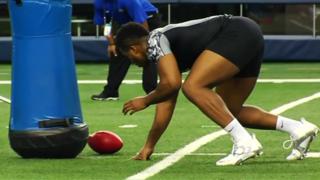 Olympic discus thrower Lawrence Okoye expects to succeed in his bid to forge a career in the NFL.

With the NFL Draft taking place at the end of the month, the Briton, who came 12th in the Olympic discus final in London, could be about to change sports again.